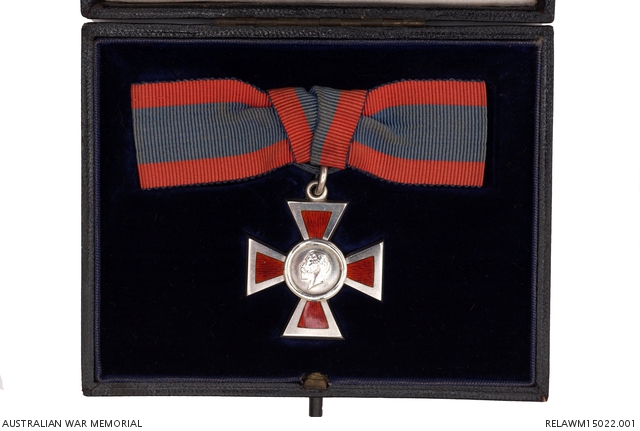 Awarded to Head Sister Emma Argyle Cuthbert at Buckingham Palace on 1 March 1919. Sister Cuthbert joined the Australian Army Nursing Service at its inauguration in 1902. She embarked for First World War service on 5 December 1914 with 1 Australian General Hospital. Sailing aboard the 'Kyarra' the unit arrived in Cairo in January 1915 and opened the hospital at Heliopolis. Sister Cuthbert was involved in treating the first casualties from Gallipoli and accompanied 900 wounded back to Australia in August 1915. She returned to 1 AGH in Cairo aboard the same vessel. In March 1916 the unit left Egypt and arrived at Marseilles on 5 April 1916. Sister Cuthbert was given charge of 16 Australian nurses and sent to No 3 British Hospital at Le Treport. In June she transferred to No 6 British Stationary Hospital at Frevent. This was the first receiving hospital behind Arras and she was involved in nursing German prisoners as well as gassed soldiers. From October to January 1917 Sister Cuthbert nursed in an officer's ward in a convent outside Frevent. On 28 January 1917 she was ordered to report to AIF headquarters in London and was attached to 3 AGH which was going into France for the first time. After some time waiting at Brighton and then in London the unit left for France in April, but was split up amongst British units. Sister Cuthbert served with No 2 British Hospital at Abbeville until 3 AGH was ready. After several months at Abbeville she joined No 2 AGH at Winneruese in September and experienced bombing attacks as 2 AGH, along with two British hospitals, was located in a field next to a railway bridge. Sister Cuthbert remained here until the end of the war, celebrating the Armistice in Boulogne. In January she was sent to London to await transport home and on 1 March 1919 was presented with the Royal Red Cross. The recommendation was for her 'Particularly good work as Deputy Matron on two occasions'. On 8 March 1919 Sister Cuthbert embarked for return to Australia.