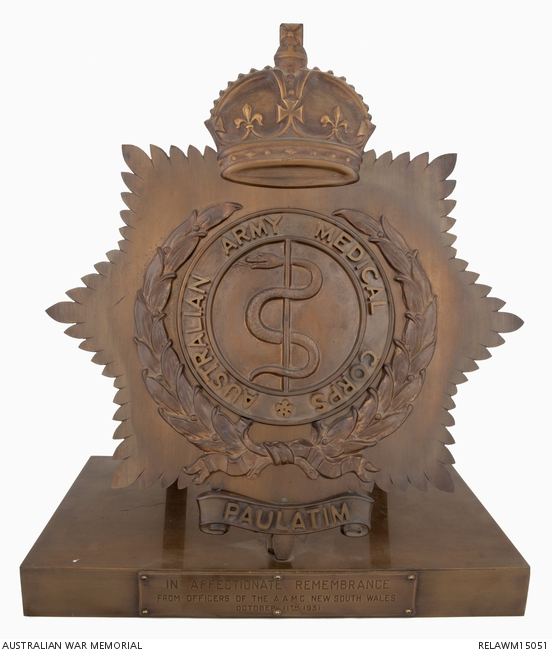 Large bronze badge showing a variant version of the Australian Army Medical Corps badge: a snake coiled around a staff within a circle bearing the words 'AUSTRALIAN ARMY MEDICAL CORPS', all within a laurel wreath. The central device is mounted on an eight pointed star, with a King's Crown placed over the uppermost point and the motto 'PAULATIM' mounted in a scroll over the lower point. The badge is mounted in an upright position on a hollow rectangular bronze box , with a steel base, by three angled bronze brackets. The front of the box bears an engraved dedication plate: 'IN AFFECTIONATE REMEMBRANCE / FROM OFFICERS OF THE A.A.M.C. NEW SOUTH WALES. / OCT. 11, 1931'.

Meanwhile, he and a friend had established a private engineering practice in 1894. The business grew steadily but a series of setbacks left him with large debts in 1902. Starting again, Monash recovered and became wealthy. He also gained promotion to lieutenant colonel in the Australian Intelligence Corps in 1908. Now prospering in business and the Army, in 1913 Colonel Monash took command of the 13th Infantry Brigade.

After the outbreak of war, Monash took command of the AIF's 4th Infantry Brigade, landing at Gallipoli on 26 April 1915. In July he was promoted to brigadier. Monash took his brigade to France in June 1916. He became a major general in July and took command of the 3rd Division. The division's first major battle, Messines, was hailed as a great success. Further success followed and in May 1918, Monash was promoted to lieutenant general and given command of the Australian Corps. His first battle in this role, Hamel, came to be considered the 'perfect battle'. Monash remained in command through the victorious battles in the last months of the war.

Monash died of heart disease in Melbourne on 8 October 1931 and was given a state funeral attended by some 250,000 mourners. This plaque appears to have been made as a tribute to present to Monash's family shortly after his death.