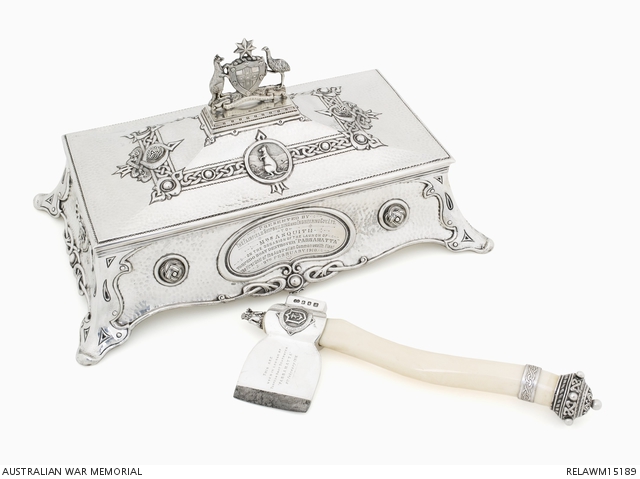 The silver casket has a hinged lid and is surmounted by the 1908 Australian coat of arms. The lid has a decorative patterned border and depicted at the front is a kangaroo. The inside of the lid is lined with white silk. Engraved on a plaque at the front of the casket is 'PRESENTED BY THE FAIRFIELD SHIPBUILDING AND ENGINEERING COY. LTD. TO MRS ASQUITH ON THE OCCASION OF THE LAUNCH OF TORPEDO BOAT DESTROYER "PARRAMATTA" The First Unit of the Australian Commonwealth Fleet 9TH February 1910'. On the proper left side of the casket is the shipbuilder's badge showing a fouled anchor within a shield surrounded by the words 'THE FAIRFIELD SHIPBUILDING AND ENGINEERING COMPANY LIMITED', and an oak wreath. On the proper right side is the head of Neptune, the Roman god of the sea surrounded by a life buoy and crossed trident and oar. An engraving on the back of the casket depicts a dockyard. Stamped on the base are four silver hallmarks and the maker's details 'R. STEWART GOLDSMITH & SILVERSMITH GLASGOW'. Inside the casket is the axe in a recessed housing lined with white velveteen. The axe is surmounted by a figure of Neptune and has an xylonite handle with a decorative silver fitting and ring at the end. The blade is engraved with 'THIS AXE USED IN LAUNCH OF TORPEDO BOAT DESTROYER 'PARRAMATTA' 9th February 1910.', and bears the shipbuilder's badge and silver hallmarks.

Mrs Margot Asquith, wife of the British prime minister, launched HMAS Parramatta, the first ship to be built for the Royal Australian Navy, on 9 February 1910 at the Clyde shipyards in Glasgow, Scotland. After pronouncing: “First-born of the Commonwealth Navy! I name you Parramatta. God bless you and all who sail in you”, Mrs Asquith used this ceremonial axe to cut a cord to release the bottle of champagne that broke on the bow of the ship as part of its “christening”. She was later presented with the axe, contained in an ornate casket decorated with naval and Australian symbols.

HMAS Parramatta was the first vessel laid down for the Australian Commonwealth Naval Forces. Built in the United Kingdom and commissioned in September 1910, she reached Australia in November in the company of her sister ship HMAS Yarra.

Following the outbreak of war in August 1914, Parramatta took part in operations against the German Pacific colonies. She landed men as part of the force ordered to take the German wireless station at Bitapaka and captured two small German vessels. Parramatta subsequently carried out further patrol operations in New Guinea waters in company with Yarra and Warrego. In December Parramatta, accompanied by Warrego and the tender Nusa, steamed 310 kilometres up the Sepik River to check for any German presence. Parramatta returned to Australia in February 1915 and was employed on patrol work locally and in Malayan, Philippines and East Indies waters.

In May 1917, in company with Warrego and Yarra, she sailed for the Mediterranean, being joined en route by HMAS Ships Swan, Torrens and Huon, thus concentrating the Australian Destroyer Flotilla. After a brief stop in Malta, the flotilla proceeded to the port of Brindisi in southern Italy. Beginning in October 1917, the flotilla spent much of the next year conducting patrols as part of the blockade of the Adriatic Sea, which was aimed at preventing the passage of enemy submarines sailing from Austrian ports into the Mediterranean. On 16 November 1917, Paramatta was one of several Australian ships that went to the aid of the torpedoed Italian transport Orione. Parramatta, assisted by Yarra, took the Orione in tow, and was attacked by a German submarine in the course of doing so. The Orione was later passed to the care of an Italian tug. In April 1918 the Australian Destroyer Flotilla was incorporated into the 5th British Destroyer Flotilla.

On 12 November 1918, Paramatta was part of the Allied fleet that entered the Dardanelles after Turkey agreed to an armistice. After carrying dispatches between Constantinople and Sevastopol in December 1918, Parramatta, with the rest of the Australian flotilla, visited England before returning to Australia in March 1919.

Now obsolete, Paramatta was laid up, but was recommissioned for training duties in 1925-26. In 1929 she was dismantled and her hulk was towed to the Hawkesbury for use as convict accommodation, but this decision was reversed by public outcry. She was subsequently used as a barge. Paramatta's hulk was abandoned in the Hawkesbury but in the 1970s her bow and stern were recovered and are now memorials at Garden Island and Parramatta respectively.