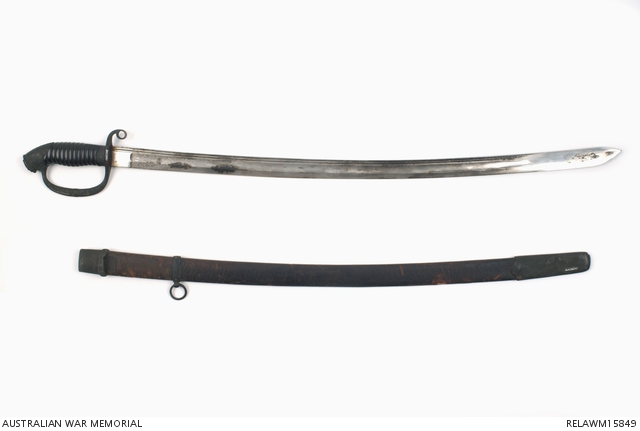 Imperial Russian Pattern 1909 Cavalry Officer's sword and scabbard. The blackened brass hilt has a D shape stirrup guard with the cypher of Nicholas II on the pommel. The grip is black bone with horizontal rings. The curved blade has a wide central fuller with two smaller fullers near the back edge on both sides to 145 mm from the point. An Imperial Russian eagle is etched on the left side and the cypher of Nicholas II on the right near the ricasso which is stamped ALEX COPPEL SOLINGEN and the trade mark of a set of scales. The black leather scabbard has a black brass chape and locket with a loose hanger ring on a band 150 mm from the throat.

This sword was collected on the plain near the right bank of the river Tigris at Baghdad.