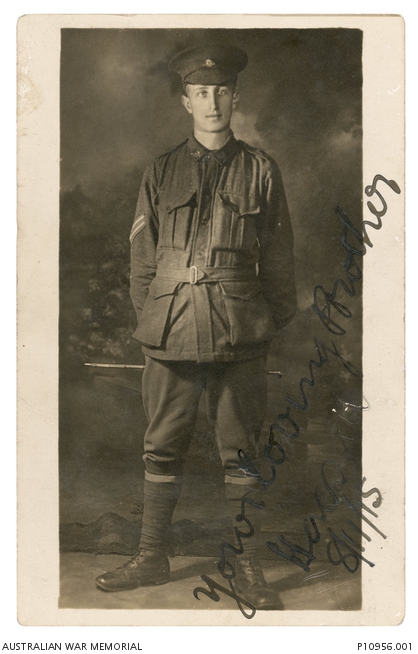 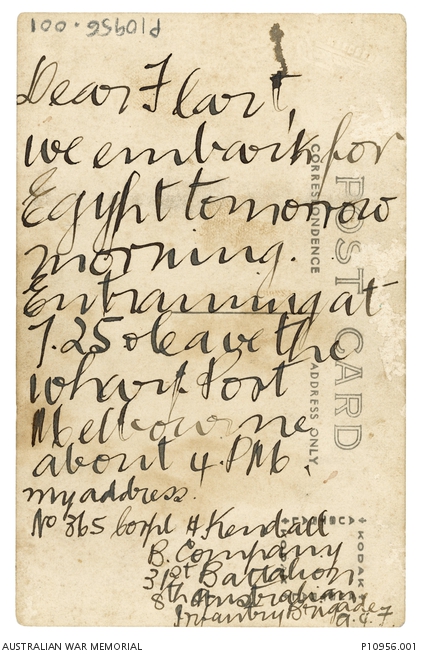 Studio portrait of 365 Corporal (Cpl) Hassall Marsden Harding Kendall, 31st Battalion. A bank clerk of Singleton, New South Wales, prior to enlistment, he embarked from Melbourne on 9 November 1915 aboard HMAT Wandilla (A62) for Suez. Cpl Kendall was initially reported missing in action and, following a Court of Inquiry, was deemed to have been killed in action on 19 July 1916 at Fromelles, France. He was aged 21 years. In 2008 a burial ground containing the bodies of 250 British and Australian soldiers was located at Pheasant Wood, France. The soldiers died during the Battle of Fromelles on the night of 19-20 July 1916 and were buried by German troops. In 2010 all of the remains were reburied in the newly created Fromelles (Pheasant Wood) Military Cemetery. At the time of the official dedication of the cemetery on 19 July 2010, ninety-six Australians, including Cpl Kendal, had been identified through a combination of anthropological, archaeological, historical and DNA information.