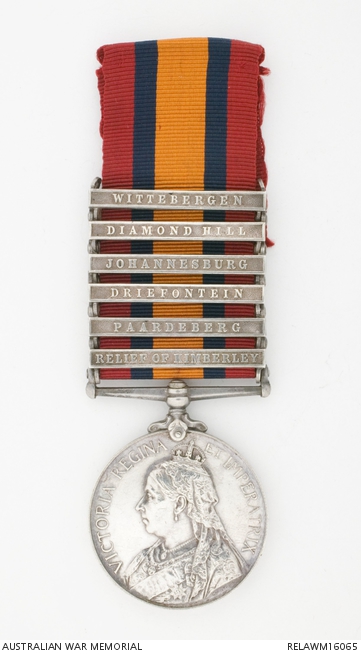 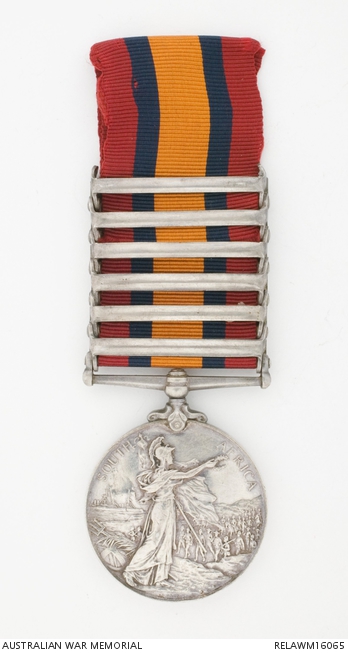 Awarded to Private Alexander Macdonald (also spelt McDonald) of the 1st New South Wales Mounted Rifles (1 NSWMR) for his service in South Africa during the Boer War. Macdonald was born on 11 November 1871 at Duntulm, near Ashford NSW, one of nine children of Alexander and Margaret Macdonald who had emigrated from Scotland in 1864.

He served in South Africa with A Squadron, 1 NSWMR. The squadron was originally made up of men who had served with the NSWMR before the war in the partial payment system. It was made up of 'good shots and daring riders'. The bulk of the squadron (104 officers and men), together with their horses left Sydney aboard the transport Aberdeen on 3 November 1899. They were followed shortly after by a smaller group of 25 NCOs and privates. The first group arrived at Cape Town, South Africa on 6 December.

The squadron took part in a number of actions, including engaging the Boers at Johannesburg on 28 May 1900, entering the city the next day, and at Pretoria in June. The bulk of the squadron returned to Australia on 13 December, but Macdonald had already embarked for Australia with several other members of his unit on 3 November 1900.

He married Madelaine Alice Deliotte Darby on 18 January 1904 at Inverell NSW. They had four children. Alexander Macdonald died in 1961 in Sydney.

Alexander's older half brother, Hugh Peter Macdonald was born in Scotland and came to Australia with his brother, William, after his father and step mother had emigrated. He arrived too late to see his father alive. He became the Member of Coonamble and Castlereagh in the NSW Legislative Assembly from 1894 to 1906. He was instrumental in establishing the Shearers Union, which is now the Australian Workers Union. Macdonald is also attributed as the author of the popular Boer War song 'When the Empire Calls'.