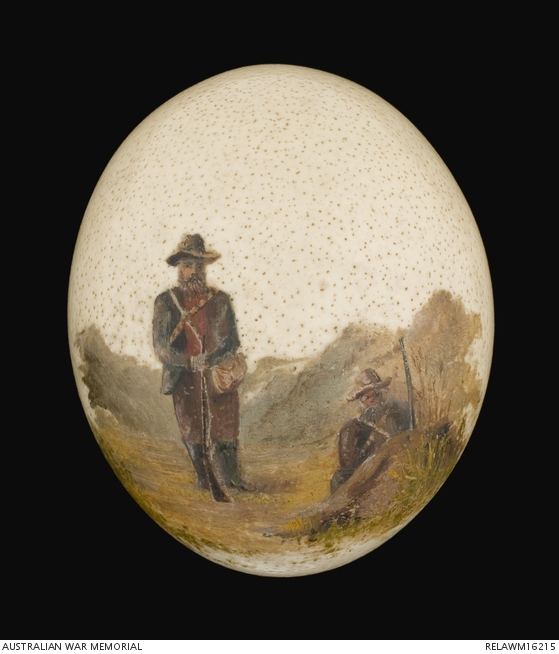 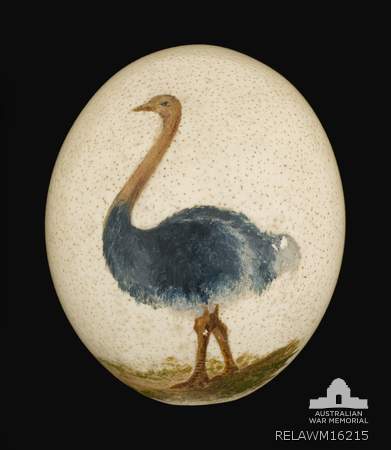 Ostrich egg painted in oils with an ostrich on one side and an image of two bearded Boer game hunters on the other. One man is standing and the other is partially concealed behind rocks and grass. There is a 32mm diameted hole at the bottom of the egg where the contents have been drained before decoration.

Collected by 2 Regimental Quartermaster Sergeant John Keating Paul during his service with the 1st Victorian Mounted Rifles Contingent to the Boer War. Paul was born in England in September 1864 and served as a professional soldier with 2nd Battalion, Royal Sussex Regiment. He took part in the Sudan campaign of 1885, in the action at Hasheen and in the advance to Taimi and Takool. He subsequently served in the Hazara campaign of 1888, before emigrating to Victoria. Paul settled in South Australia after the Boer War and volunteered for service in the First World War, in August 1915, shortly before his 51st birthday. He was assigned as a captain to 32 Battalion, AIF, and sailed for overseas service from Adelaide on 2 November 1915. After training in Egypt Paul transferred to 105 Battery of 22 Howitzer Brigade in March 1916. In France he transferred to 5 Field Artillery Brigade, before moving again in October 1916 to 2 Division Artillery. He was promoted to major in January 1917 and returned to Australia, suffering from debility in July 1917.