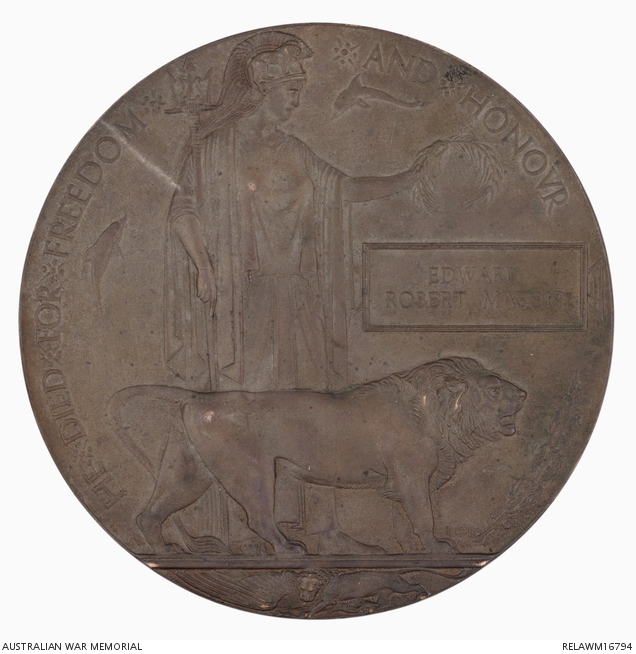 Bronze next of kin plaque, showing on the obverse, Britannia holding a laurel wreath, the British lion, dolphins, a spray of oak leaves and the words 'HE DIED FOR FREEDOM AND HONOUR' around the edge. Beneath the main figures, the British lion defeats the German eagle. The initials 'ECP', for the designer Edward Carter Preston appear above the lion's right forepaw. A raised rectangle above the lion's head bears the name 'EDWARD ROBERT MASON'.

Edward Robert Mason was born in London in 1885 and later emigrated to Australia with his parents. He worked variously as a ship's steward, cook and barman. In 1910 he fought briefly with the United States Mexican Irregulars during the early stages of the Mexican Revolution. Returning to New South Wales he married Mary Ford at Gosford at the end of 1911. They had one son, Robert.

Mason enlisted in the AIF on 17 August 1914 and was posted as a private, with the service number 81, to B Company, 4 Battalion. He later transferred to C Company when the battalion reorganised in Egypt in February the following year. From the start of his service he was assigned as a batman (personal servant) to Captain Hector Clayton.

The battalion left Sydney on 20 October 1914, aboard the transport HMAT A14 Euripides. After training in Egypt it landed at Gallipoli on 25 April 1915 as part of the second and third waves. Mason was shot in the head by a Turkish sniper, either on 8 or 9 May, while the battalion was consolidating its trench line. He was carried down to ANZAC Beach and immediately evacuated to Alexandria on the hospital ship Gloucester. Although he reached Egypt alive, he died shortly after he was admitted to 17 British General Hospital, on 11 May. He was buried at the Chatby War Memorial Cemetery.

Witnesses to his wounding, contacted by the Red Cross in response to enquires from Mason's family, gave conflicting dates for the wounding. All, however, were agreed that Mason had either been making a dugout for himself or sitting outside it when he had been shot by the sniper. Captain Clayton and C Company's sergeant major also stated that they had warned him to be careful as he was within range of a sniper who had already caused casualties in the Company. Mason had responded that he would be alright and that the Turk could not hit him.

Captain Clayton wrote personally to Mrs Mason to tell her of her husband's gallantry on Gallipoli, and of his devotion both to his battalion and to his wife and little son. This commemorative plaque was sent to Mary in 1921. She had remarried in 1917.