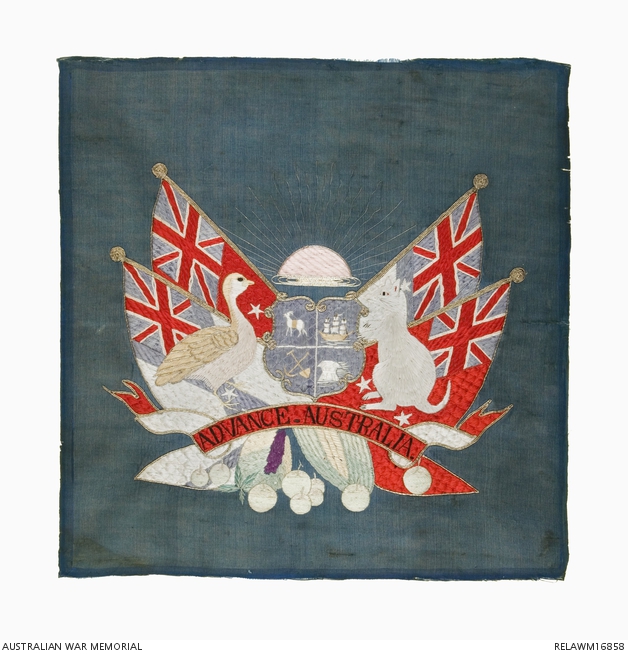 Chinese hand embroidered cloth on a midnight blue cotton ground. The embroidery is executed in long and satin stitch with overlaid diagonal stitches that give a quilted effect to the larger areas of embroidery. The centre shows an unofficial Australian coat-of-arms, with a blue shield edged with silver thread, divided into four quarters. Embroidered on the quarters in white and pale brown thread are a sheep with a golden fleece, sailing ship, crossed pick and shovel, and a wheat sheaf. Above is a pink rising sun with silver thread rays, emerging from a silver thread sea. Beneath is a red and white scroll with black lettering 'ADVANCE. AUSTRALIA.'. To the right of the shield is a Chinese representation of a 'kangaroo', in white, looking rather like a rat. The fur, eyes and whiskers are finely worked. To the left is an 'emu' with finely worked feathers in white and light brown. The wing feathers are edged with silver thread and the bird resembles a water fowl. There are four flags with silver thread poles angled behind the shield and animals. Two represent what became the Australian red ensign after Federation, and two the so-called Australian Federation Flag, the chief symbol of the political movement in the 1880s and 90s to federate the Australian colonies. Geometric patterns are embroidered beneath the scroll, in greens and purple, together with pale green fruits and a leaf.

This embroidery was brought back to Australia by Able Seaman S Horace Priest after his service with the New South Wales Naval Contingent sent to the Boxer Uprising in China in 1900-1901. Members of the contingent found that the Chinese would undertake the most intricate embroidery for very little money, so they commissioned a number of embroideries to decorate their barracks in Peking in November 1900. They had difficulty in conveying descriptions of a kangaroo and emu to the Chinese, as can be seen in the resulting animals on this embroidery.