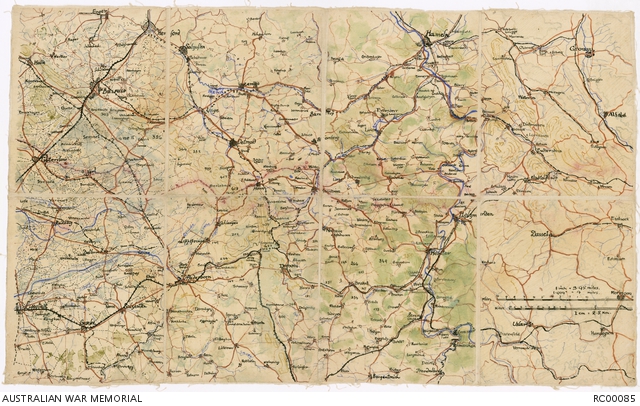 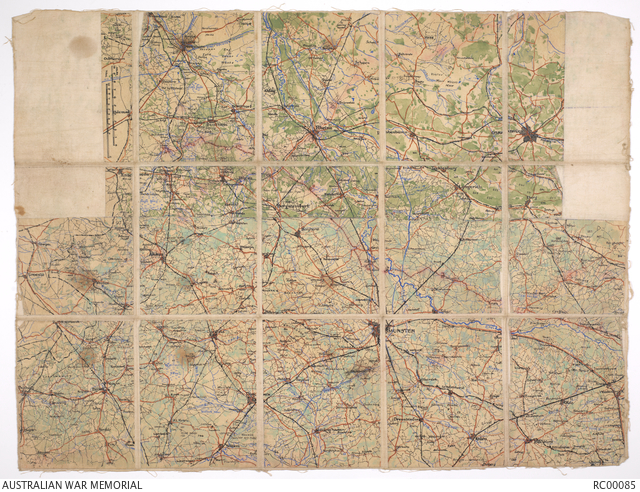 Hand drawn map in two parts belonging to Captain Stanley Bruce Purves, showing the area west of Holzminden. The one part shows the location of Holzminden and covers the area from Bielefeld to Dassel, Germany and joins with the second part, also drawn by Purves, which covers the area west of Bielefeld to the Dutch border. Scale 1:250,000, mounted on fabric. Captain Purves was a Scottish Engineer prior to the First World War. He enlisted in the British Army, in the Scottish Horse Yeomanry in 1915, and later transferred to the Royal Flying Corps and the Royal Air Force training as a pilot. His aircraft was shot down in 1918 and he was captured by the Germans. He was captured and held at Holzminden Prisoner of War Camp. At Holzminden, half of the camp's 140 prisoners took 9 months to dig an 80 metre tunnel. It was started in a disused wine cellar, with the dirt being hidden in another cellar. On the night of 24 July 1918, twenty-nine prisoners escaped through the tunnel. The rest were unable to escape as one officer got stuck and brought down part of the tunnel as he struggled to free himself. Nineteen of the twenty-nine who escaped were recaptured. The other ten made it to the Dutch border. Captain Purves was one of the ten who made it to Holland, arriving at the quarantine camp at Rijks, Holland on 8 August 1918, along with two other escaped prisoners, Tullis and Leggatt. After the war Captain Purves immigrated to Australia with his wife, Sybil. He worked on the Sydney Harbour Bridge, and later became the General Manager of the Goliath Cement Works at Railton, Tasmania. Used in conjunction with a home made compass RELAWM16875.