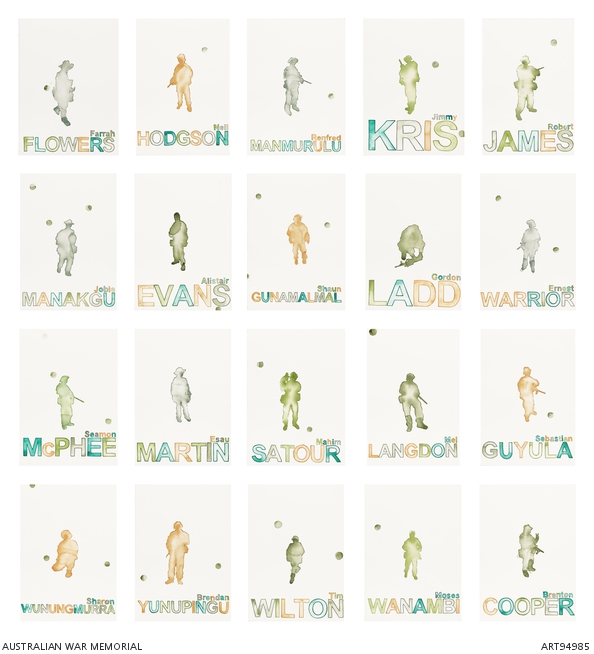 NORFORCE personnel refer to each other as "green skins". A practice adopted by the ADF from the Indigenous Australian concept of different skin groups, it acts to unify the soldiers and build relationships with local communities. On a visit to the Memorial Albert observed that there were few identified portraits of Indigenous servicemen and women on the gallery walls. Inspired by the "green skins" or young recruits he met in the Northern Territory, Albert immortalised them in a series of named portraits. Collectively, these portraits commemorate NORFORCE. At the same time they effectively reclaim a presence for Indigenous Australians in our national military history and collections.

In 2012 Tony Albert became the Australian War Memorial's first official war artist to be attached to the Australian Army's Regional Surveillance Unit North West Mobile Force (NORFORCE). Formed in 1981, NORFORCE is one of three specialist infantry units which operate across the north of Australia. Its area of responsibility covers 1.8 million square kilometres, which makes it the largest of any army surveillance unit in the world. Indigenous soldiers make up 50 per cent of NORFORCE personnel, and are recruited predominately from the area they patrol in order to draw on local knowledge. NORFORCE traces its history to the Northern Territory Special Reconnaissance Unit and the 2/1st Northern Australia Observer Unit, known as the "Nackeroos", formed in response to the fear of Japanese invasion during the Second World War.