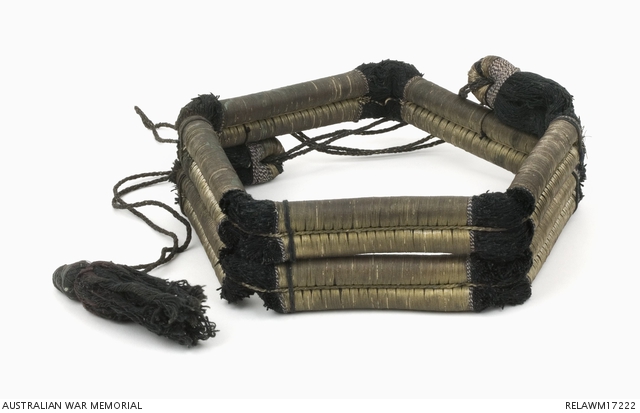 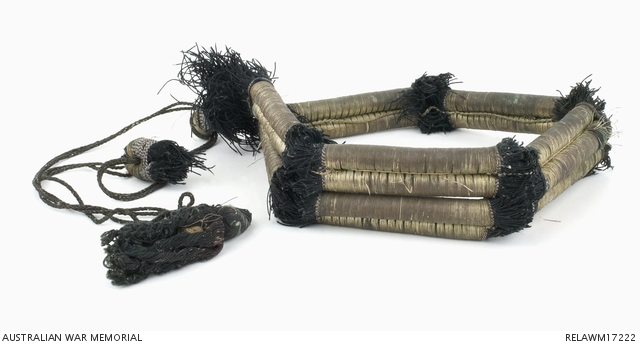 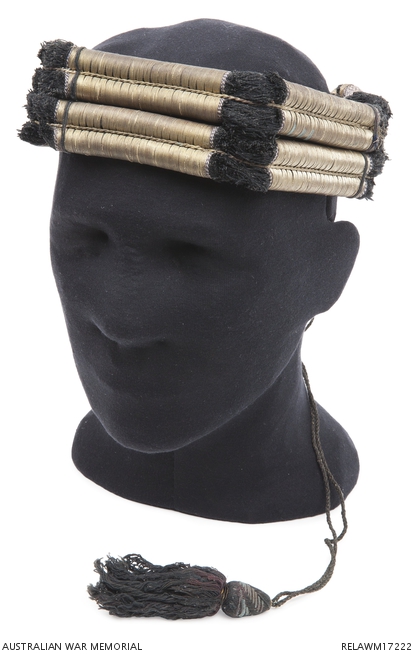 Sheik's agal to be worn over a keffiyeh to secure it over the head. Finely spun strands of black wool are tightly bound with gold bullion thread to form a thick cord which is then bent, showing the exposed black wool at the angles, to form a pentagon. The three sides to be worn around the front of the head are composed of four strands of cord. Each pair of cords is secured together with vertical bands of black thread at the angles of the agal, and by a horizontal row of cream hand stitching which extends around all the angles to stabilise the pentagonal shape of the headdress. The two back sections are composed of a double row of cords and the folded back ends of the upper (right side) and lower (left side) cords from the front sections. A double length of finely spun and plaited wool cord extends in a loop from the folded cord on the upper right, and in a loop and tassel from the folded cord on the lower left. These allow a small amount of adjustment to the fit of the agal. The agal is fragile and the black threads at the angles of the headdress are splitting. The threads of the tassel are matted together.

This agal is said to have been worn by Colonel Thomas Edward Lawrence, popularly known as Lawrence of Arabia, during his service in Middle East in the First World War. Born in Wales in 1888, Lawrence completed his education at Oxford University in 1910, graduating with First Class Honours. He abandoned his post graduate research to take up an offer to become a practising archaeologist in Middle East at the end of 1910. For the next three years, apart from working in his chosen field, he travelled extensively in Arabia, often living with Arabs, learning their language, and a number of dialects, Arab culture and adopting Arab dress.

At the beginning of 1914, because of his knowledge, he was employed by the British military to survey the Sinai peninsula under the guise of an archaeological expedition. Lawrence enlisted for service in the British Army in the First World War in October 1914 and was posted to Cairo, where he worked in Intelligence. His knowledge of the Arabs made him an ideal liaison officer between the British and Arab forces, and in October 1916 he was sent to the desert to gather intelligence on Arab nationalist movements that might support the British cause.

For the rest of the war Lawrence fought with Arab irregular troops in guerrilla operations against the forces of the Ottoman Empire. He was able to convince the Arabs to coordinate their revolt against Ottoman rule to aid British interests. Persuading the Arabs to leave the Turks in their by now isolated post in Medina, the Ottomans were forced to tie up large numbers of their troops to garrison the city and protect its only supply line, the Hejaz railway, which needed constant repair after sabotage by Lawrence and his Arabs.

In 1917 Lawrence coordinated the successful Arab attack on the strategic port city of Aqaba, and at the end of 1918 led the Arab Army into Damascus in conjunction with Allied forces. Towards the end of the war and at the Versailles Peace Conference in 1919 Lawrence tried to persuade the British government that Arab independence was in their interests, with limited success. A popular film show showing Lawrence's work with the Arabs, put together by the war correspondent Lowell Thomas, gave him much publicity as 'Lawrence of Arabia' or 'The White King of the Arabs'.

In an attempt to escape from it he enlisted in the Royal Air Force in 1922 under an assumed name. In 1923 his identity was revealed and he was forced to leave, joining the ranks of the Royal Tank Corps under the name of Shaw. Still using this name he was permitted to transfer to the RAF in 1925, where he remained until his discharge in 1935. A few weeks later he was died in a motorcycle accident. During the war Lawrence had again adopted many Arab customs and traditions, and was especially known for wearing Arab robes and riding camels and horses in the desert.

During the war Lawrence had again adopted many Arab customs and traditions, and was especially known for wearing Arab robes and riding camels and horses in the desert. This agal and the associated cloak, or aba, (RELAWM17221) were acquired from the widow of Australian born artist Stuart Reid. Reid's family moved to New Zealand when he was a child and in 1909 he moved to London to study art. During the First World War he served in Gallipoli and Sinai with the Scottish Light Horse before transferring to the Royal Flying Corps in Palestine. He continued to sketch and paint and was a personal acquaintance of Colonel Lawrence, who apparently presented him with this agal and cloak. Reid was commissioned to paint a number of works for the Imperial War Museum. In 1922 he returned to New Zealand. He later settled in Sydney.