We are all heroes 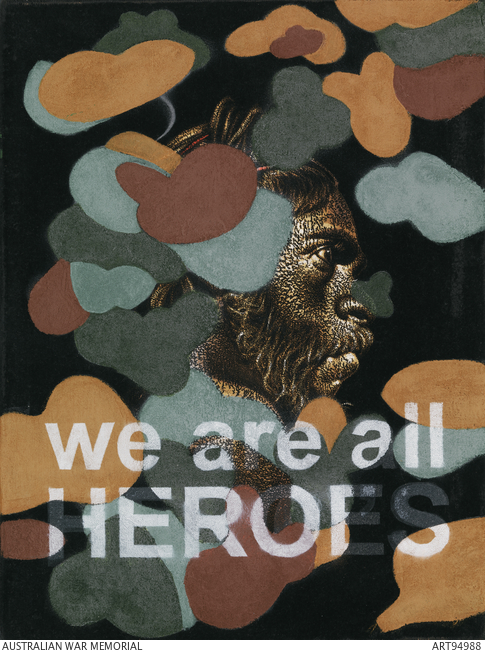 'We are all heroes' is a re-worked, found black velvet painting which explores the historical representation of Indigenous Australians through kitsch, mass produced tourist memorabilia and souvenirs. Velvet paintings of this type were historically sold either as finished products or as "paint by numbers" kits and were especially popular during the 1970s. Albert refers to these types of objects as "Aboriginalia". In his art he combines these objects with paradoxical language, patterns and over painting to express cultural alienation and draw attention to social prejudices within Australian society.

The velvet painting used as the starting point for 'We are all heroes' features an image of an Indigenous man in three-quarter profile: a stereotypical image of the 'noble savage' as warrior. The artist has overlaied this image with a camouflage pattern, creating a new foreground, and painted the text 'We are all heroes' beneath it. The camouflage acts as a signifier for Indigenous military service - the artist has incorporated the hues of modern NORFORCE camouflage - while also alluding to its hidden history in Australia. The overall effect is to subvert the original painting, which perpetuated racist stereotypes, to both reveal and celebrate the little known history of Indigenous military service.