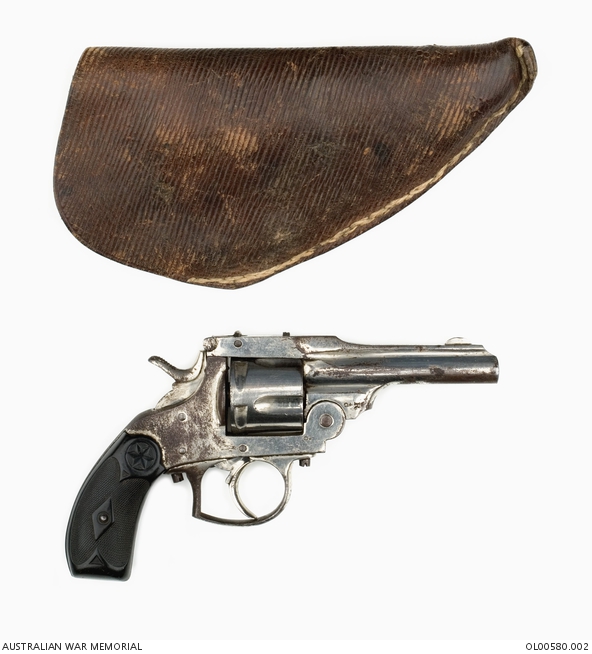 Belgian five shot, double action pocket revolver and holster. The nickel plated frame has various Belgian proof marks. The two piece black plastic checkered grips have a star in the top quarter. The pistol is in a brown, ribbed leather open top holster. Hand stitched down one edge with a belt loop at the back. The front edge has some letters and numbers stamped into the leather.

Frederick Birks was born to Samuel and Mary (née Williams) Birks at Buckley, North Wales on 31 August 1894. Educated at the local St Matthews Anglican School, he was a conscientious pupil with an interest sports, particularly boxing and football. Birks migrated to Australia with friends in August 1913. Working in South Australia, Tasmania and Victoria, he enlisted in the AIF as private 47 on 18 August 1914 at Broadmeadows, Melbourne, barely two weeks after the declaration of war.

Posted to the 2nd Australian Field Ambulance, Birks embarked with his unit on HMAT 'Wiltshire' from Melbourne on 19 October. Landing on Gallipoli around dawn of the 25th April, Birks immediately demonstrated the courage that would mark his military career. Under heavy fire he carried the wounded from areas that could not be accessed using stretchers. He repeated the actions again at Cape Helles on 8 May. A recommendation for a Military Medal was drafted to recognise his actions on Gallipoli though no further action was taken. On 26 June he was slightly wounded.

Birks unit was withdrawn to Mudros on 9 September and did not return to the peninsula. Transferring to Egypt in early 1916, he embarked for France in March, arriving in Marseilles on the 30th. On 21 April, Birks was promoted to lance corporal.

In September a second recommendation for a Military Medal was forwarded, this time for his actions during fierce fighting near Pozieres on 26 July. Disregarding his own safety, Birks once again braved heavy fire to rescue his comrades. The award was gazetted on 16 November.

The following month he was promoted to corporal. In February 1917, Birks attended officer training and was commissioned 2nd lieutenant to 6 Battalion on 26 April. On 21 September, he was killed while trying to extricate some of his men that had been buried by a shell blast near Ypres, following the action for which he was posthumously awarded the Victoria Cross.

Birks is buried in Perth Cemetery (China Wall) near Ypres, Belgium. The Victoria Cross was presented to his brother, Captain Samuel Birks of the Royal Field Artillery, by King George V at Buckingham Palace on 19 December 1917.

A cenotaph in Birk's honour was erected in the grounds of St Matthews, Buckley, in 1921.