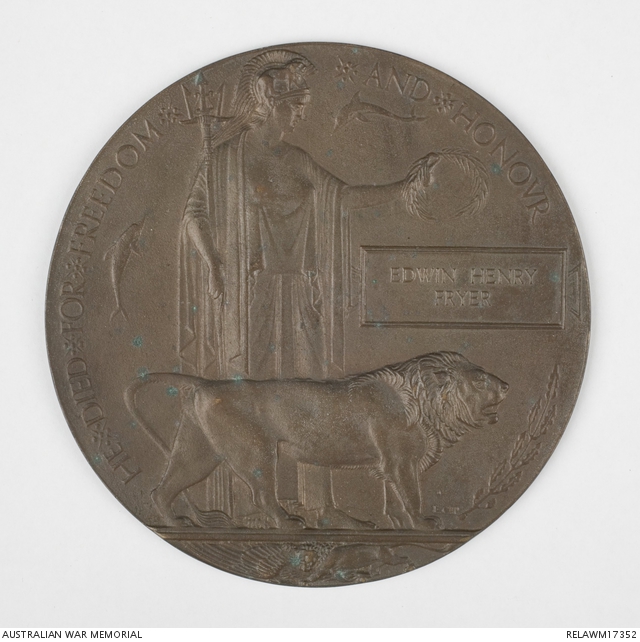 Bronze next of kin plaque, showing on the obverse, Britannia holding a laurel wreath, the British lion, dolphins, a spray of oak leaves and the words 'HE DIED FOR FREEDOM AND HONOUR' around the edge. Beneath the main figures, the British lion defeats the German eagle. The initials 'ECP', for the designer Edward Carter Preston appear above the lion's right forepaw. A raised rectangle above the lion's head bears the name 'EDWIN HENRY FRYER'.

Born in Maclean, New South Wales, Edwin Henry Fryer was employed as a grocer when enlisted in the AIF on 4 August 1916. He had previously served in the Boer War as a trooper in the NSW Mounted Rifles, and for 6 years in the Citizens Military Forces with the NSW Scottish Rifles. Fryer was posted a private, service number 600, to the 10th Reinforcements for the 13th Machine Gun Company. He sailed from Melbourne for service on the Western Front in February 1917, aboard RMS Osterley.
After further training in England and France Fryer joined No 1 Section, 3rd Machine Gun Company in October 1917. He died of wounds received at Hun's Walk near Messines, Belgium on 18 January 1918. A fellow machine gunner wrote: 'He had a leg shot off, and the other broken in 3 places, and was also hit about the body. He was conscious when I saw him. He was speaking about his wife and child [Janet, and five year old Edwin]. What would happen to them etc.' Fryer was taken to the 2nd Field Ambulance's dressing station at Neuve Eglise but died there that night. He was 34. He is buried at the Kandahar Farm Cemetery, Ypres.
This commemorative plaque was sent to his widow, Janet Emily Fryer, in October 1922.