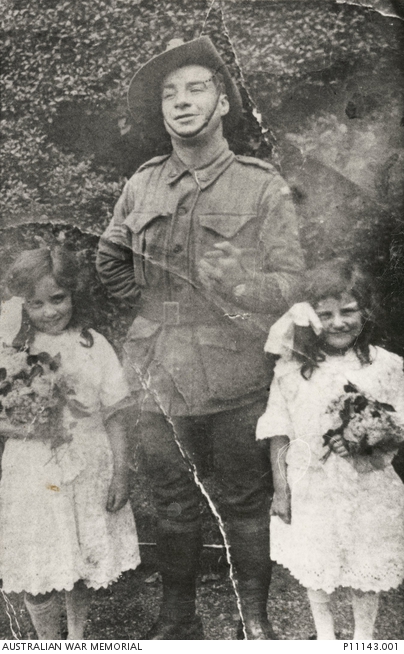 Informal outdoor portrait of 1617 Private (Pte) Michael Ribeiro, 4th Battalion and his nieces Sarah Appelboom (left) and Elizabeth Appelboom (right). Pte Ribeiro, a seaman from Hammersmith, London, enlisted at Liverpool, NSW, on 17 December 1914 and embarked aboard HMAT Seang Choon (A49) at Sydney on 11 February 1915. He served on Gallipoli and was evacuated from there to England in August 1915 suffering from influenza. This gave him the opportunity to visit his family then, and during periods of leave over the next two years. He served with the 4th Battalion on the Western Front where he was wounded, recovered from his injuries and returned to his unit. Pte Ribeiro was killed in action in France on 16 April 1918. His brother 201189 Pte Joseph H Ribeiro, Kings Own (Royal Lancaster Regiment) was killed in action on 18 July 1917.