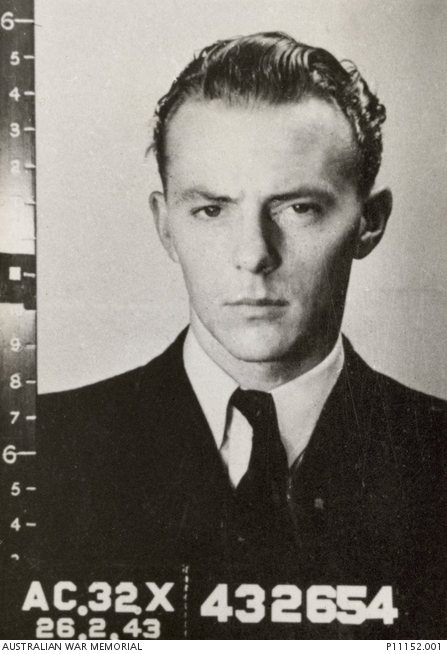 Portrait of 432654 Flight Sergeant (Flt Sgt) Allan Graham Aitcheson, 30 Squadron RAAF. Flt Sgt Aitcheson, a pharmacy apprentice from Charters Towers, Queensland, had previously served in the AIF as NX123398 Corporal A G Aitcheson, AAMC. He tranferred to the RAAF in January 1943 and is presumed to have died on or before 25 January 1945 in the Netherlands East Indies (NEI) as a prisoner of war (POW) of the Japanese. One of a series of images used by Allied prosecutors during the war crimes trials of Japanese charged with the murder of Australian pilots. The prints were produced in some numbers and used by investigative units in in South East Asia trying to locate the graves of missing RAAF pilots and aircrew. Initially showed to local natives and to Japanese prisoners of war, some were later produced in court as evidence during the trials of Japanese POW charged with the men's murder.