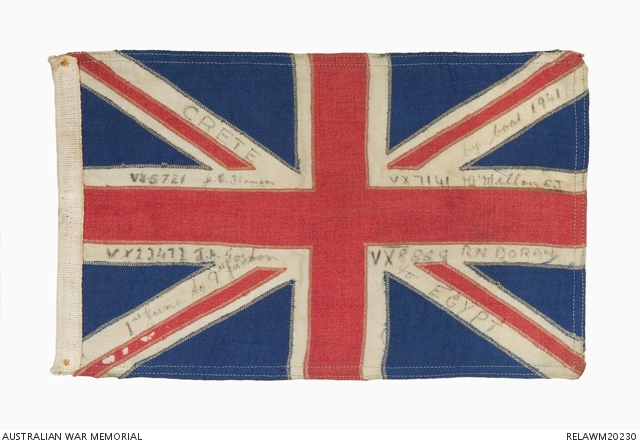 On the morning of 1 June 1941, members of 2/7 Australian Infantry Battalion, then prisoners on Crete, were given permission to attempt to escape from the island as their chances of being evacuated were remote. A party of seven from C Company began a search for a boat only to find that all they came across were badly damaged. When they had just about given up hope of finding one they encountered two other members of C Company, VX7141 George McMillan and VX23471 James 'Jim' Gorton, who had acquired a small rowing boat. After a short discussion McMillan decided that the boat could only hold four men and he and Gorton claimed two of the places as they had found the boat. The other members then nominated VX8889 Roy Doran, as one of them later explained 'Doran was the only married man in our party and we reckoned he should have the chance to get back to mum and the kids'. The remaining place was filled by a cutting of cards and was won by VX5721 John ‘Jack’ Thomson when he drew the Jack of Spades. VX9534 John ‘Dainty' Desmond Peck, one of those to be left behind, then produced this flag which he had obtained as a souvenir from a Greek girl who had made it to welcome the British to her country. Peck handed the flag to the four in the boat stating that it would be best for them to have it as it might allow them to identity themselves if they encountered British forces on their way to Egypt. After rowing through the night, the four reached a small island about 30 miles from Crete at about 9 am next morning. There they joined up with a larger party who had obtained possession of a steel invasion barge. In this, the group succeeded in making their way across the Mediterranean to the Egyptian coast. For about 80 miles the barge had been motor-driven but after the petrol supply ran out it drifted, aided to some extent by an improvised mast and a sail made with four blankets. The party reached Egypt on 11 June after suffering severe privations through shortage of food and water. This flag was flown first on the rowing boat and then on the barge and Thomson later described the flag as giving the group ‘a great sense of comfort at a time when we needed it most as it was a symbol of a nation that had never known defeat, the British Empire'. The flag was later sent by Thomson to Australia and was subsequently carried as a lucky charm by his brother while serving in New Guinea.