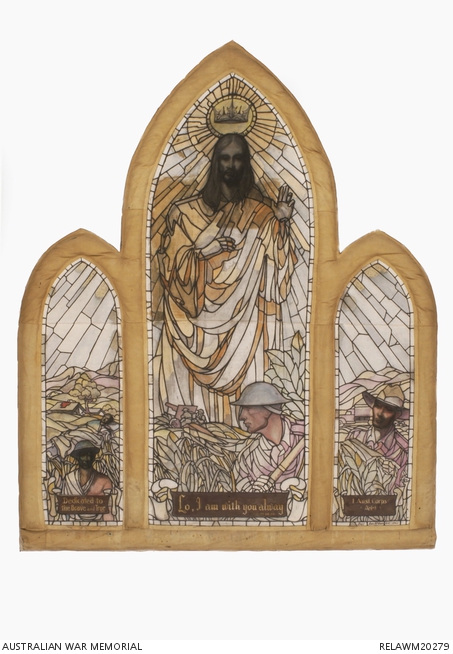 Imitation stained glass window, made from painted white canvas with eyelets around the edges, that has been stretched and tied to a frame. The 'window' is in the gothic style with a large central panel flanked by smaller ones on both sides. All have pointed 'gothic' arches. The design of the central panel features Jesus looking down on a helmeted soldier who is advancing through jungle, with a manned artillery piece in the background. Near the bottom is the inscription 'Lo, I am with you always'. The right side panel depicts a slouch-hatted soldier in the jungle with a truck in the background. The left side panel depicts a helmeted soldier, with a small building beneath a tree in the background.

Associated with Captain Ian McBain AIF, and Reverend (later Chaplain-General) G E Vertigan, Army Chaplain's Department. The window was designed and executed by Captain Ian McBain, RAE, in 1944, while he was attached to HQ I Corps. He also selected the inscription. It was made for his Corps new makeshift chapel, which was being constructed under the guidance of Reverend Vertigan at the unit's base at Barrine on the Atherton Tableland in North Queensland.

In later life Ian McBain told his grandson that he got the idea for painting the window on canvas after watching a lizard catching insects for dinner on the outside of the roof of his tent, silhouetted by the sun during one of his breaks. “He told me that the canvas was soaked in a solution of gum turpentine and methylated spirits to make it translucent.”

The canvas was mounted on its frame by the parachute refolding platoon. The cotton waste padding came from the unit's motor shop as did the chassis black paint, which was used for the imitation 'lead'. Soft pencil lead was used for black and mapping or cartographical ink was used for the colours.

The window was mounted about three feet (a metre) off the ground in the end wall of a bamboo chapel created on a slab footing on the banks of Lake Barrine in the Atherton tablelands of Far North Queensland.

The unit was posted to Morotai in the Halmahera Islands soon after the window was made and took it with it. The Church of the Holy Trinity, a non-denominational chapel, which was designed by Captain McBain, was built at Morotai and the window installed in it. It is said that the Commanding General who visited the base whilst in Morotai, walked past the chapel several times wondering how they got a stained glass window to the island before he was informed it was made of canvas.