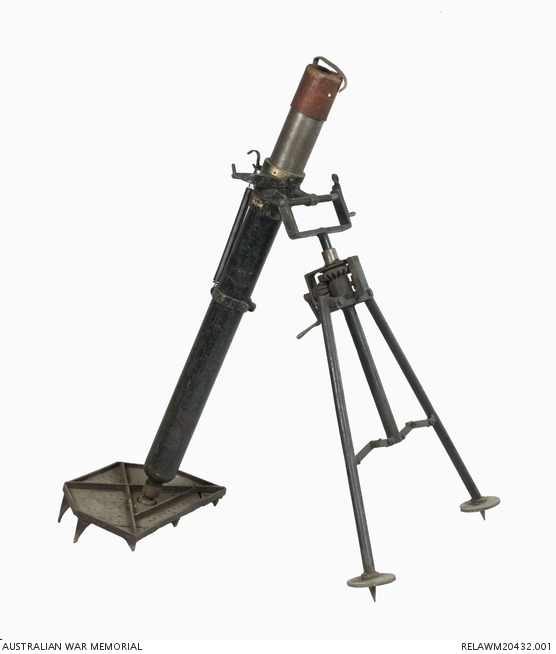 Volunteer Defence Corps 3 inch mortar barrel made from industrial steel. The barrel is based on a three inch mortar pattern barrel and is designed for practice and instructional training. The barrel has a smoothbore profile and has provision for a bipod. The barrel is painted black. There are no markings.

3 inch practice mortar barrel used by the 2nd Battalion Australian Volunteer Defence Corps (VDC). The mortar used is a working model in all respects and capable of firing service high explosive bombs although the opportunity never arose during the war to test this. The mortar was fabricated by Private Rayburn Keith Williams at his engineering shop. Private Williams was born in Adelaide, South Australia on 2 August 1905. He enlisted into the VDC on 28 March 1942 and served until 2 October 1945. The barrel is a service type, factory reject with faulty bore. By adapting a special lathe bed, Private Williams was able to rebore it. The service type firing pin was missing and a substitute fitting was made to fire a .303 cartridge without the assistance of the hinged striker. The first dummy bombs were machined out of solid steel. However the charge was seldom powerful enough to expel it from the barrel. Skeleton bombs were then fabricated with a reducing socket at nose and service type tail pieces with flanges were fitted to take absorb gas pressure. With this streamlined effect there was no difficulty in throwing the light bomb 640-730 metres with primary and secondary charges made from black sporting powder. Blank .303 cartridges provided for range practice.