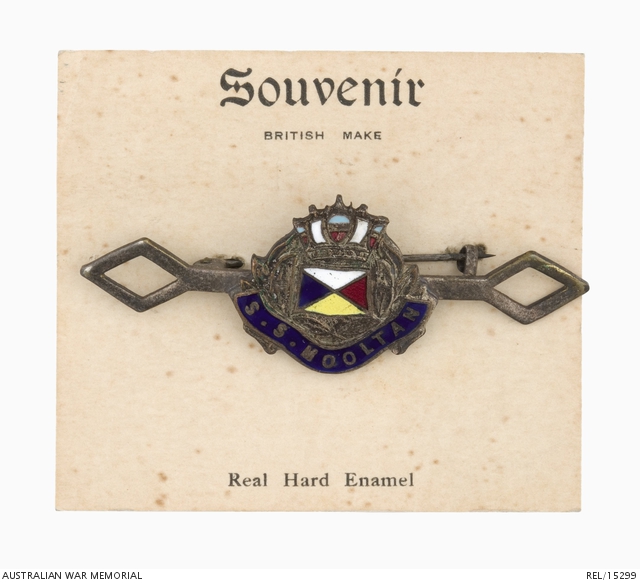 Chrome bar brooch with hollow diamond shape at each end of the bar. In the centre is the enamelled P&O shipping line house flag. The flag is divided into four triangular sections. The top is white, the bottom yellow, the left red and the right blue. Above the flag is an enamelled naval crown. The flag is surrounded by a wreath. Below the wreath is blue enamelled scroll with 'S.S. MOOLTAN'. The badge is attached to its original card which is printed with 'Souvenir', 'BRITISH MAKE' AND 'Real Hard Enamel'.

Badge associated with the service of 41454 Flying Officer Albert Robert Nivison-Smith (also spelt Nevison-Smith), the son of Robert Henry and Amy Ernestine Nivison-Smith of Narrabri, NSW. Nivison-Smith travelled to England in 1938 and trained in the Royal Air Force at No. 8 Elementary and Reserve Flying Training School, Reading and No. 11 Flying Training School at Shrewsbury. During the Second World War he served with 612 Squadron RAF, stationed at RAF Dyce in Aberdeenshire, Scotland. At the beginning of the war the squadron flew Avro Ansons on coastal patrols. In November 1940, they began converting to Armstrong Whitworth Whitleys and it may have been while training in a Whitley that Nivison-Smith was killed in a flying accident on 5 November 1940. Nivison-Smith is buried at Dyce Old Churchyard a cemetery located near RAF Dyce. He was 22 years old when he died. The badge is from the P&O ship, Mooltan and may have been purchased by Nivison-Smith when he travelled to England in 1938. The P&O flag in the centre of the badge incorporates the royal colours of Portugal and Spain, the countries to which P&O's earliest services ran in the 1830s.