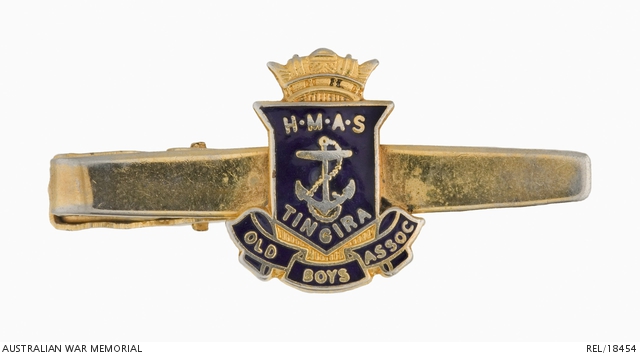 Gilded and enamelled tie clip. In the centre is a shield with an anchor and the words 'HMAS TINGIRA'. Above the shield is a naval crown. Beneath the shield on a scroll are the words 'OLD BOYS ASSOC'.

Associated with the service of Able Seaman George Frederick Bloy. Bloy enlisted inthe RAN in 1916 as a boy seaman and trained at the converted sailing ship HMAS Tingira from 25 July 1916 to 12 October 1917. He served in various vessels and shore establishments throughout the First World War and remained with the navy until November 1925. He re-enlisted in 1932 and served until the end of August 1936. During the Second World War Bloy enlisted in the army, serving as V379117 Lieutenant Bloy from 15 March 1942 until 24 August 1944.