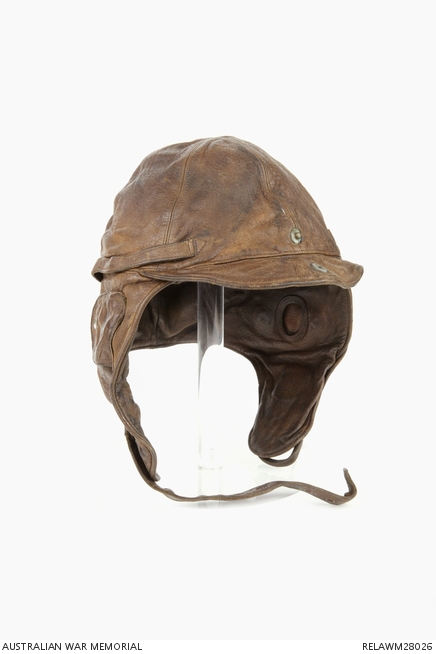 Leather flying helmet with a fold-down brim secured by a single snap fastener. The helmet has a leather chinstrap with a leather covered steel buckle. At the ears are holes for the insertion of communication equipment. The holes are covered by leather flaps, secured by snap fasteners. Above the brow is a leather adjustment strap, secured at the rear of the helmet by a small steel buckle. The strap is located by two large and two small retaining loops. The crown of the helmet is lined with brown velveteen fabric, and has three fabric labels stitched inside it. One of these is a makers' label which reads 'NAGATA & CO. KOJIMACHI, TOKYO'. The other two give size details and date of manufacture, (October 1940) and the owner's name 'Chuman'. A typed manilla tag which was attached to the helmet at time of donation read: 'PROPERTY FOUND IN THE SUBMARINE RAISED FROM THE HARBOUR BED AT TAYLOR BAY, NEAR BRADLEYS HEAD, SYDNEY, ON 5th JUNE, 1942, CONSISTING OF LEATHER CAP WITH THE NAME OF THE SUB-LIEUTENANT ON LABEL STITCHED TO LINING. N.D. JAMES. Inspector of Police.'

Japanese aviator's leather helmet worn by Lieutenant Kenshi Chuman, commander of the midget submarine '14' (M-27) which attacked Sydney Harbour on the night of 31 May/1 June 1942. Chuman and his navigator, Ensign Takeshi Omori, were launched from the large 'mother' submarine I-27 in the early evening of 31 May, and were the first of the three Japanese midget submarines to enter the harbour that night. Following in the wake of a Manly ferry, the midget submarine passed the detector cable loop stretching between Middle Head and inner South Head at 8.01 pm. Attempting to pass through the gap at the western end of the anti-torpedo boom stretching between Georges Head and Watsons Bay four minutes later, Chuman's vessel went off course and became entangled in the netting of the boom. The submarine was sighted by a watchman at 8.15 pm, but it was not until twenty minutes past ten that the Royal Australian Navy confirmed its presence in the net. At 10.35, Chuman and Omori, realising that their situation was hopeless, fired a demolition charge fitted in the bow of their craft. The entire forward section was blown off, and both men killed instantly. Their bodies were cremated, and the ashes returned to Japan in September 1942. It is assumed that this aviator's helmet was carried for protection against cold and damp conditions aboard the midget submarine, but that it was not being worn at the time of the attack.