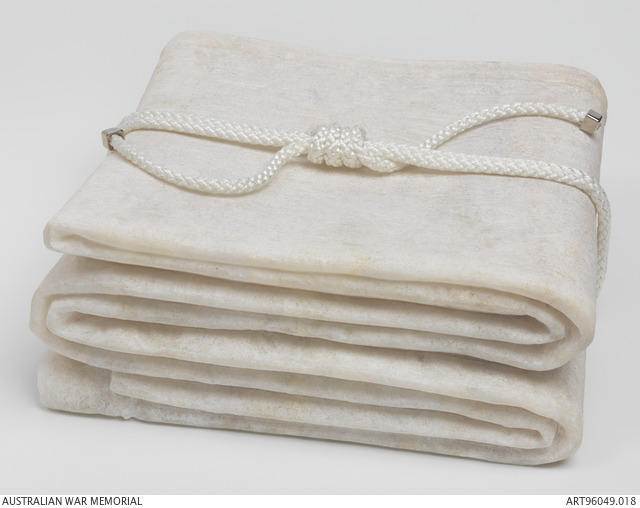 "As of today…" invites the viewer to contemplate the ultimate sacrifice made by the 43 Australians who have died as a result of their service in Afghanistan. The work stems from Seton’s interest in flags and how they operate as symbols of communities and nations’ shared aspirations. "As of today…" focuses specifically on the folded flag given to each fallen soldiers’ family – it is often first used to drape the casket in a military funeral service.
Seton has created marble versions of a folded flag with a halyard tied around its centre. By doing so he positions these objects, and the men they represent, within a history of ancient monuments related to civilisation and war. The power of the sculpted flags is also developed through the way their pale marble, slightly pink in hue and each imbued with blushes and veins, evokes the flesh of a human body. Each flag represents an individual and a life lost in the line of duty. Seton began the series in 2011, exhibiting them in several exhibitions. Subsequently, the Memorial purchased these works and commissioned the artist to complete the honour roll.