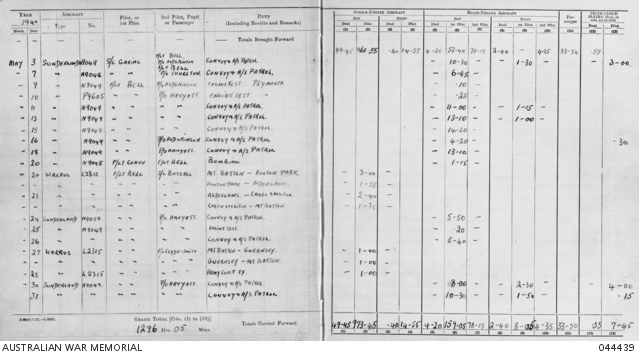 RAF Station Mount Batten, Plymouth, Devon, England. 31 May 1940. Copy of the penultimate completed page of the flying log-book of Flight Lieutenant John Napier Bell, a pilot then serving with No. 10 (Sunderland) Squadron RAAF. The following and last completed page of the log-book records the mission on which Bell was killed. On the 18 June 1940, a Supermarine Walrus amphibian aircraft piloted by Bell - who had extensive experience of flying this type of aircraft - and carrying a British Intelligence Officer working for the Admiralty, Captain Hope, a wireless operator, Sergeant C. W. Harris, and crewman Corporal Nowell RAF, departed on a secret mission to Brittany in occupied France, to evacuate Madame de Gaulle and her children. Nothing further was heard of this aircraft which was later known to have crashed in foggy conditions at Ploudaniel near Brest, killing all on board. Bell and his wireless operator, Sgt Harris, were the first members of No. 10 Squadron RAAF killed in action.