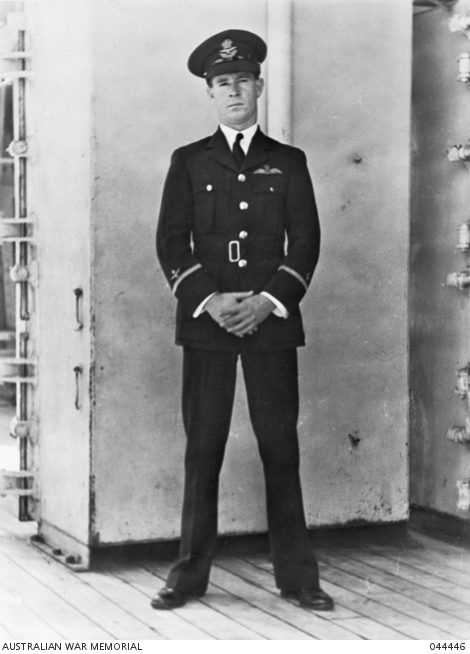 Aboard HMAS Canberra. c. February 1939. Portrait of Flight Officer John Napier Bell RAAF of No. 9 (Fleet Cooperation) Squadron RAAF embarked on the "County" class cruiser HMAS Canberra of the RAN. Bell joined the RAAF as an Air Cadet on 15 July 1935 and after training as a pilot was posted in September 1938 to No. 5 (Fleet Cooperation) Squadron RAAF at RAAF Base Richmond equipped with Supermarine Seagull V (Walrus) amphibian aircraft. On 1 January 1939, the squadron was renumbered to No 9 Squadron and in February 1939, Bell and one of the squadron's Supermarine Seagull V (Walrus) amphibian aircraft embarked in Canberra to operate in the Fleet Cooperation role. Bell remained in Canberra until August 1939 during which time he completed eighty catapult launches from the ship in fulfilling his role of fleet cooperation duties. On completion of his tour of duty in Canberra, Bell was posted to No. 10 (General Reconnaisance) Squadron RAAF based at RAF Station Mount Batten, Plymouth, Devon, England, operating Short Sunderland flying boats in the anti submarine role. Arriving in January 1940 he completed a conversion course to Sunderland aircraft and went on to fly as a captain in a number of patrols in the Bay of Biscay area. Because of his experience on Walrus aircraft, Bell was directed to carry out a secret mission on 18 June 1940 to evacuate Madame de Gaulle and her children from the Brittany area of occupied France. Tragically the mission ended in disaster when the aircraft crashed and burnt while Bell was attempting to land in foggy conditions near Ploudaniel and all occupants of the aircraft were killed. With evacuation by air now impossible, Madame de Gaulle was forced to seek other means of transport and was fortunate to secure passage for herself and her children on a British destroyer for the voyage from Brest to Britain. Bell, his wireless operator, Sergeant C. W. Harris, a RAF wireless mechanic, Corporal Nowell, and a British Intelligence Officer working with the Admiralty, Captain Hope, were buried in the village of Ploudaniel and the graves carefully tended by the local citizens throughout the German occupation until permanent headstones were erected in 1946.