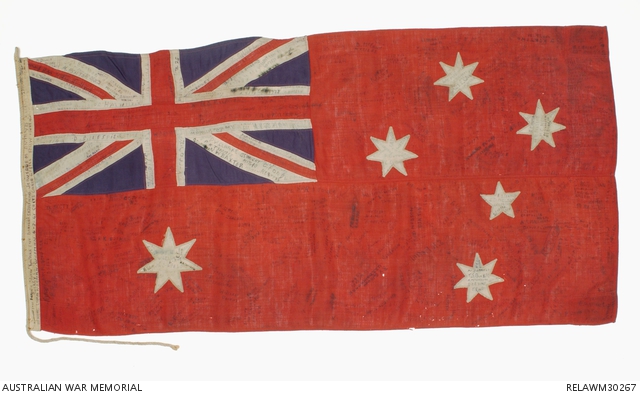 Australian red ensign bearing numerous signatures of Australian and Allied soldiers in ink and indelible pencil. Most of the signatures are on the front of the flag but a few are on the hoist and on the back. The hoist is marked, in capital letters, 'Melbourne 1/10/40 Fremantle Colombo Kantara East Barabra (sic) Sarafand Jersualem Amirya Athens Lamia Norman Wiseman 4-3-40 Crete Cania Greece POW 1 June 1941'. The flag is marked in ink, in capital letters, down the fly, 'Melbourne 1/10/40 Freemantle (sic) Colombo Kantara East Barbra Sarafand Jerusalem Egypt Amirya Greece Athens Crete P.O.W. 1/6/41 Greece P.O.W. 29/6/41 Turkey 5/5/42 Syria Palestine Nusierat Kilo 84 Oro Bay Buna Milne Bay Bowen Brisbane Sydney Liverpool Ingelburn Greta' as well as with the names of ships in which the owner of the flag, Corporal W E Watson travelled before and after his captivity as a prisoner of war. The reverse of the hoist bears a machine embroidered manufacturer's label 'MADE BY S. CALDER LTD. 340 PITT ST.'. A subsequent signature, of a Vietnam veteran, C E Courtney, was added to the flag c 1970.

NX17521 Corporal William Edward Watson served with 6 Division AAOC and 7 Division Provost Company. He was captured on Crete on 1 June 1941, shipped to Athens and then Salonika. He escaped from Salonika on 29 June 1941, joined up with other POW escapees and hid in the Greek mountains until 1942, when he successfully escaped by boat to Turkey on 5 May 1942.

Watson was discharged medically unfit on his return to Australia and subsequently joined the American Small Boats Division, serving in New Guinea. He was awarded the Military Medal for 'courage and perserverance in escapes from POW camps'.

In 1914, Watson's father, who had served with a British Regiment before emigrating to Australia, was farewelled by the Australian Attorney General W M 'Billy' Hughes (later Prime Minister) as he returned to Britain with other Imperial Reservists for service in the First World War. Hughes presented Watson with an Australian red ensign which he carried with him throughout the war. Watson claimed that it was the first Australian flag to be flown in France during the war, and on his safe return to Australia presented it to the Australian War Museum (later War Memorial) for display. His son, W E Watson, asked that the flag be returned to him to carry during his service in the Second World War, but his request was refused. Watson then applied to Billy Hughes, who was again Attorney General, for another flag, and this red ensign is the one that Hughes sent to him, together with the words, 'I would like to say that it is my earnest prayer that you will be spared to carry it triumphantly throughout this present conflict. You will bear it through lands where the valorous tradition of the A.I.F. is a by-word. I know that this glorious heritage will be safe in the keeping of Australia's sons of the 2nd A.I.F.'. Watson junior carried it throughout his service in Egypt, concealed it during his captivity in Crete and Greece, and again carried it during his service in New Guinea.