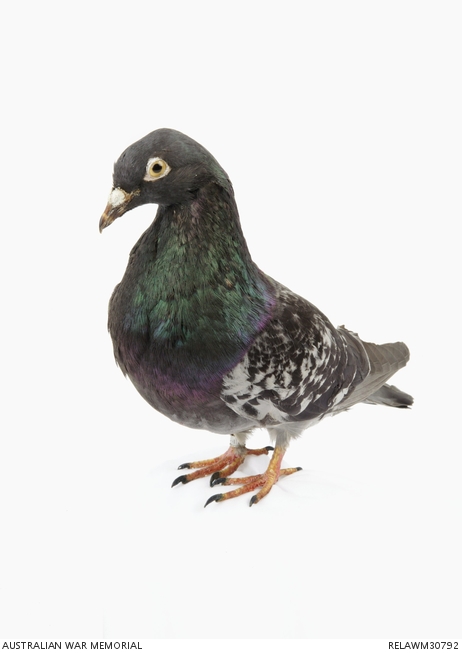 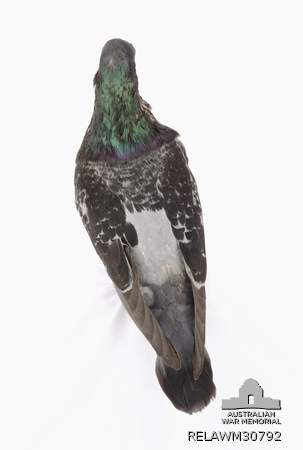 This bird, a Blue Chequer Cock, was located at Loft No 5 of the 1st Australian Pigeon Section, attached to the United States Forces at Manus Island, part of the Admiralty Islands. The bird was bred, and donated to army, by Mr A J Favell, of Victoria.

A copy of the message carried reads: '"G" Brewer Task Force 5.4.44/ Still no activity on H4 road except Jap patrols working out of DRABITO. Estimate one hundred (100) at DRABITO, twenty five at METAWARRI. Heard two shots fired in vicinity of DROMDRA. Last night at least 25 shots were heard at different villages. Natives say Japs have enough food to last for three weeks. During the day 4 Apr 44 a Drum sounded at DRABITO. At that time at least 10 Jap patrols came within 50 yards of us. We could not see them but could hear them talking. My position at this time (143-630). All patrols were coming from SOUTH going to DRABITO. Japs fired at pigeons when they were released at 1300. Natives say there is at least 200 Japs in a two mile radius of DRABITO. No Pill boxes or Trenches in vicinity of DRABITO. DRABITO could be bombed with good results./ Time 0950 released. Place. 155-610 5 April 44.'

The pigeon was awarded the Dickin Medal in February 1947 for carrying the message detailed above. The citation reads: 'During an attack by Japanese on a US Marine patrol on Manus island, pigeons were released to warn headquarters of an impending enemy counter-attack. Two were shot down but DD43, despite heavy fire directed at it, reached HQ with the result that enemy concentrations were bombed and the patrol extricated.'