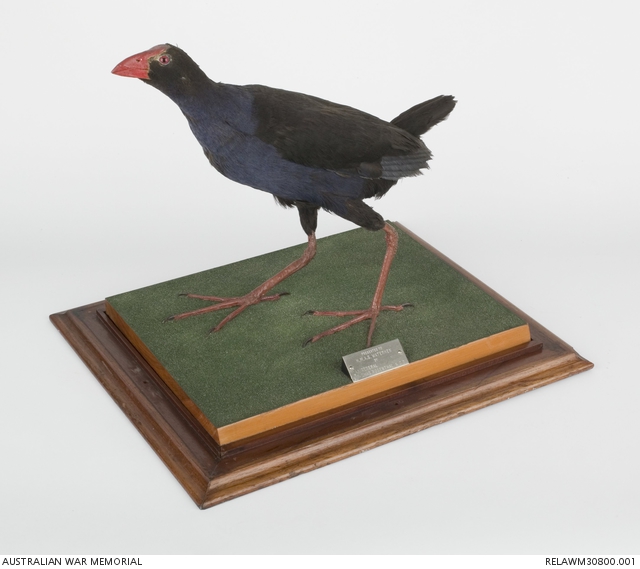 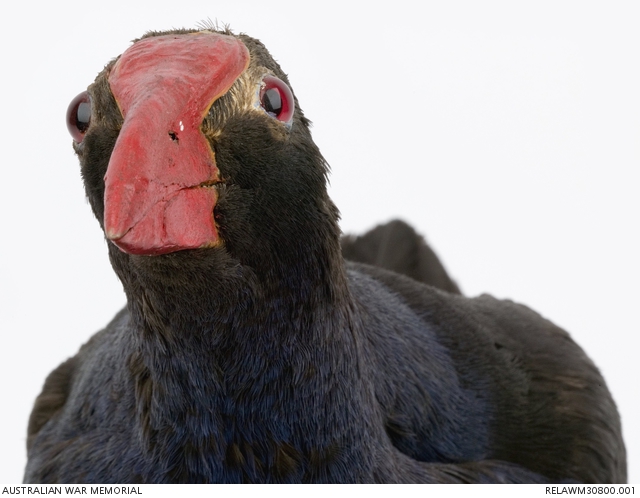 Mounted skin of a swamp hen (porphyria porphyria), also known as a purple or Macquarie water hen. The bird is contained in a glass case with wooden edges and base. An engraved silver plate at the front base of the case reads, 'PRESENTED/ TO H.M.A.S. WATERHEN/ BY/ MAJ. GENERAL/ SIR CHAS. ROSENTHAL. K.C.B.'.

This stuffed swamp hen was presented to the captain and crew of HMAS Waterhen in 1934 by Major General Sir Charles Rosenthal, apparently as a joke.

Waterhen, a British V/W Class destroyer, built in 1918, was recommissioned into the Royal Australian Navy in October 1933. Her first captain, sent to Britain to bring the ship to Australia, was Rosenthal's youngest son, Lieutenant Commander Alvord Sydney Rosenthal. HMAS Waterhen was his first command. Waterhen, already an old ship, called 'The Chook' by her crew, was in and out of reserve until 1939 when she was re-commissioned for war service in September.

Together with HMA ships Stuart, Vendetta, Vampire and Voyager, also old ships, she was part of the 'Scrap Iron Flotilla' which operated the Tobruk Ferry run, supplying troops at Tobruk throughout the siege and evacuating wounded men to Egypt while under attack from German and Italian bombers. On 30 June 1941 the Waterhen sank off Sollum after being attacked by German dive bombers on 29 June. She had been so badly damaged that she sank while under tow. Her crew and passengers had been safely evacuated and there were no casualties. HMAS Waterhen was the first RAN ship to be lost in the Second World War. This Waterhen mascot survived because it and other items from the ship deemed unnecessary for wartime service, such as the wardroom silver, had been removed and stored in Sydney in 1939.