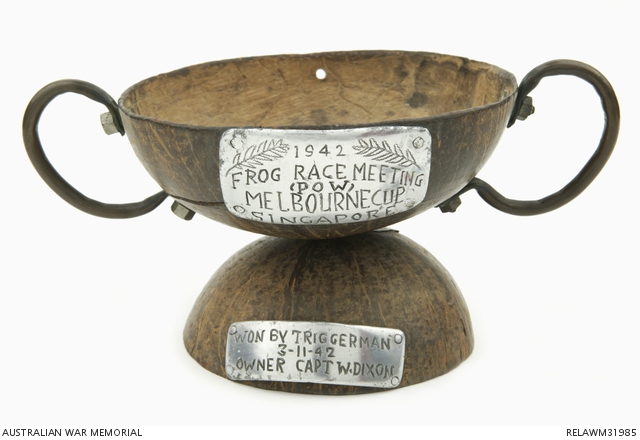 Improvised trophy cup made of two parts of a coconut shell joined together in the centre by a nut and bolt. Each side of the cup has a curved metal handle attached by two small nuts and bolts. The cup has an aluminium plate rivetted to it engraved with laurel leaves and '1942. FROG RACE MEETING (POW) MELBOURNE CUP SINGAPORE.' The base of the cup has another engraved aluminium plate rivetted to it that reads, 'WON BY TRIGGERMAN 3-11-42 OWNER CAPT W. DIXON'.

A Melbourne Cup meet for frog racing was held by Australian prisoners of war at the Adam Park Racing Club at Sime Road prisoner of war camp on 3 November 1942. A frog named Triggerman won the event. He was owned by VX46525 Captain William Dixon, of the Australian Army Service Corps. Dixon was born in Melbourne in 1896. He served in the First World War and enlisted for service again on 12 July 1940. He was discharged on 8 November 1946.

Another POW, VX37222 Private James Purtill, later described frog racing in Singapore as 'this popular amusement did not last long, but while it was going it drew ... the whole camp in fact to the frog racing courses...The idea was simple. You chalked a big ring on the asphalt, put your candidates (suitably marked with coloured rags, papers etc.) in a box in the middle and when the betting was finished the caller lifted the box, and a dozen or so scared looking frogs hesitated a few seconds and then commenced hopping. First over the line, of course, won. The sweepstakes were small but the betting was in many cases heavy ...the crowds at the courses were two deep and money changed hands in big quantites'. According to Purtill all the frogs were given names and pedigrees, e.g. 'Gordon Bennett, out of Singapore by Capitulation'.