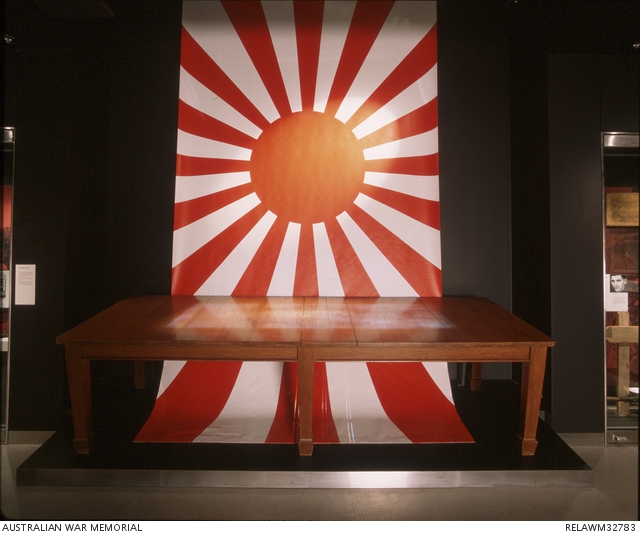 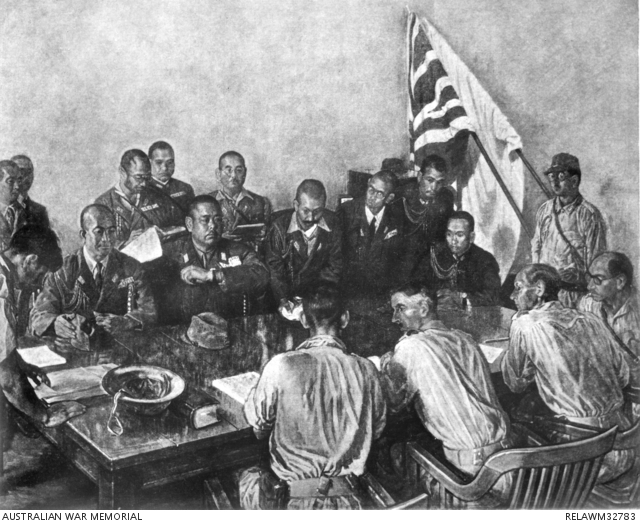 Six legged wooden table, made from teak. The table top is 32 mm thick, made from 20 abutted planks of wood, constructed in two layers, screwed together and supported by a box frame reinforced with a cross frame, to which the tapered legs are also screwed. A beading (15 mm high) is attached to the base of the side frame (100 mm deep), designed to protect the user's legs when seated. The square profile legs are 750 mm high and taper from a width of 100 mm at the top, to 70 mm at the start of the box foot. Each box foot is 100 mm high, 95 mm wide at the top and 70 mm at the base. An engraved nickel plated plaque is tacked to the proper right side frame and says 'PRESENTED TO / THE AUSTRALIAN WAR MEMORIAL / BY / FORD MOTOR COMPANY OF MALAYSIA LTD / November 1964'. There are no manufacturer's markings visible on or underneath the table. There are several illegible scribbles in pencil underneath the table.

During the Second World War, Singapore was the site of the British Commonwealth's greatest military defeat. Britain had built a large naval dockyard on the north coast of the island during the 1930s to use as a base from which to project naval power throughout the Asia-Pacific. The island became central to this strategy in the region. The guarantee of a British presence at Singapore was also the cornerstone of Australian defence policy.

British naval vessels, however, would not be permanently based at Singapore. The whole 'Singapore Strategy' was dependent on vessels being despatched from European waters in times of crisis, a doubtful prospect should Britain be under direct threat. Various senior Australian army and naval officers had warned of the weaknesses of this strategy, but successive Australian governments chose to ignore them. Ultimately, when the Japanese threat loomed in late-1941 Britain could spare few vessels for Singapore. Only two capital ships, HMS Repulse and HMS Prince of Wales and some destroyers arrived in early December 1941. It had been intended they would be accompanied by the aircraft carrier HMS Indomitable but it ran aground in the West Indies leaving the ships devoid of air cover and thus extremely vulnerable - both were sunk on 10 December 1941.

With the loss of the ships, the 'Singapore Strategy' crumbled and with it so did the rationale for defending Singapore. When British Commonwealth forces withdrew onto Singapore Island on 31 January 1942, the defence of Singapore was poorly conceived and conducted. Despite clear indications that the Japanese would concentrate their attack on the island's North West, the British commander Lieutenant General Arthur Percival sought to defend the entire coastline leaving him with little depth and an inadequate reserve.

The 8th Australian Division, considerably weakened after the fighting in Malaya, was allocated the vital north-western sector. When the Japanese attacked on the night of 8 February 1942, it was too weak and dispersed to hold them back, initiating a disorganised retreat towards the centre of the island. In succeeding days Percival's reluctance to commit reserves from other parts of the island, and a virtual command breakdown in the 8th Division, lead to the British Commonwealth forces being pushed back into a steadily decreasing perimeter around Singapore city into an untenable position. Over 1 million civilians remained in the city, the Japanese had captured its main water supply, and their aircraft were free to bomb at will.

In the early afternoon of 15 February 1942, at the temporary Japanese Headquarters within the Ford Motor Company of Malaya at Bukit Timah, surrender negotiations were started between a delegation led by General Percival and Lieutenant General Tomoyuki Yamashita. At 8.30pm on 15 February 1942 over 130,000 troops, including 15,000 Australians, were officially surrendered to the Japanese. 1,789 Australians had been killed since the 8th Division had entered the fray in Malaya in mid-January taking over three quarters of the total Allied combat losses and one in three of those captured would die before the war's end. The surrender negotiations between Yamashita and Percival were conducted, and the instrument of surrender of Singapore was signed, on this table.

Through the initiative of then Warrant Officer (later Major) Andrew John (Jack) Balsillie OBE this table was donated and delivered to the Australian War Memorial by the legal owners of the table, the Ford Motor Company of Malaysia in November 1964.