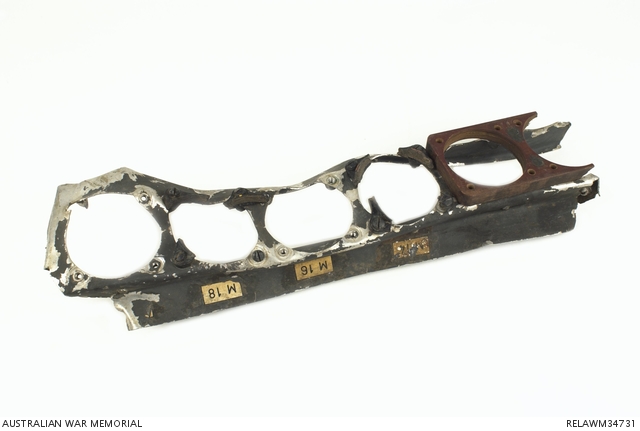 A flight engineers panel from a Junkers Ju 88 twin engine bomber. The aluminium is distorted and torn from explosion damage and all the instruments have been lost or destroyed, with only small corner pieces of Bakelite, still located by small bolts, existing for two instruments. The left hand end of the panel has been severed across the 10 mm thick fibre board mount for a twin instrument block. The first three of the remaining four matching instrument holes are labelled with black on white decals (M14, M16 and M18), while the entire panel features remnants of flat black paint. This panel is normally located at the forward right side of the cockpit, next to the engineer/co-pilot's position just below the cockpit glazing. The panel is seen in AWM photograph SUK11554.

An engineers' panel from a Junkers Ju 88 twin engined bomber shot down on 8 May 1943 over East Anglia in daylight by 408667 Flight Sergeant Robert Sydney Williams, RAAF, of 122 Squadron RAF, while flying a Spitfire VB. On 8 May 1943 six Ju 88s attempted an early morning raid on the south coast of England, but were engaged by Fighter Command Spitfires. Three Junkers were destroyed and one damaged. Two Norwegian pilots destroyed one Ju 88, which broke into three pieces, and crashed into a field; a parachute was seen to stream out of the aircraft and open. A second Ju 88 was attacked by Williams, causing it to burst into flames. At the time, 122 Squadron was based at Hornchurch, East Anglia, mainly engaged on flying sweeps over northern France. Australian War Memorial image SUK11554 depicts this object being inspected by 6971 Flight Sergeant James Samuel Hendry of Brisbane, in late 1943 while it was being displayed as part of the RAAF War Collection in London.