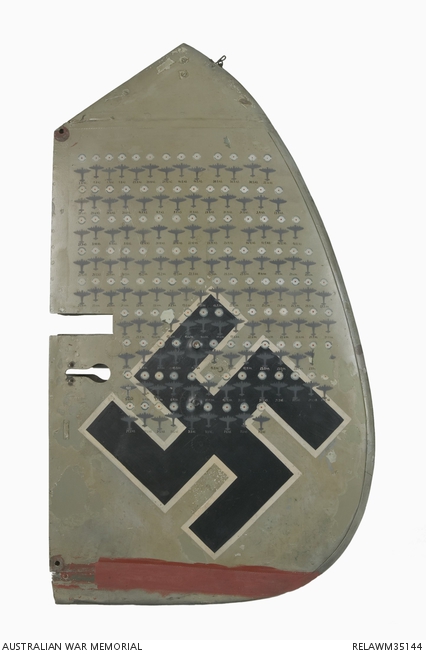 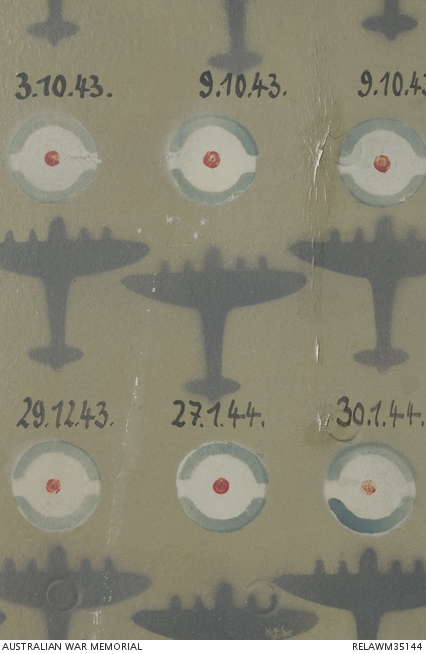 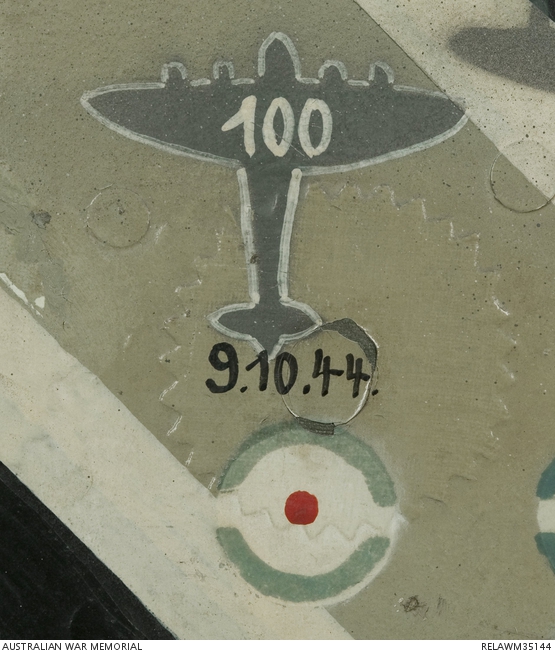 Right hand vertical stabiliser (tail fin) of Messerchmitt Bf110G-4 night fighter made of aluminium and painted with one hundred and twenty one emblems consisting of small roundels and four engined British bombers with the date of each victory underneath. The victory marking for 13 June 1944 has a 34mm x 33mm wide paint chip over it. A large hakenkreuz (swastika) is painted in black and white paint on the stabiliser and a small band of red paint is along the bottom edge covering some fabric tape. The rudder is completely missing from the rear of the stabiliser. The reverse side of the fin has remnants of the original mottled camouflage. A large dark grey coloured oval is situated on the lower reverse side, this appears to be from where the horizontal stabiliser was originally attached to the fin. On an internal horizontal spar are two faded grey manufacturers stampings - "161.85/3408" and "6135-2108". The latter was mis-stamped twice on the same position leaving a slightly blurred effect.

Major Heinz Wolfgang Schnaufer was the most successful German night fighter pilot of the Second World War with 121 kills on British and Commonwealth bombers in only 164 operational sorties. He was awarded the Knights Cross with Oakleaves swords and diamonds and was very well known amongst both Luftwaffe and Allied Air Forces who nicknamed him 'the Night Ghost of St Trond' - St Trond being one of the airfields which he flew from regulary in 1943-1944. He is believed to have shot down approximately thirty five Australians during his career. His regular crew consisted of Unteroffizier Fritz Rumpelhardt (Radar Operator) and Oberfeldwebel Wilhelm Gansler (Rear gunner). Schnaufer survived the war and returned to his family wine trading business in Southern Germany. Whilst driving along a straight road through a forest on a business trip to France on 13 July 1950 a truck pulled out of a side road and he collided with it. He died of his injuries two days later. This vertical stabiliser is for the right hand side of the tail. The Imperial War Museum in London has the other vertical stabiliser in their collection with the same markings applied.