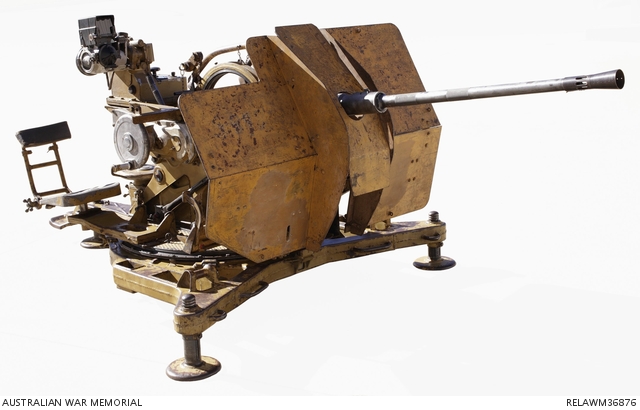 The 2cm FlaK 38 is a single barrel, magazine fed 20 mm calibre automatic weapon designed for antiaircraft use and also ground support. Fed by 20 round curved box magazine (attached to this weapon) it features a quick change barrel. An inertia block prevents rebound of the breech block. The mechanism is operated by short barrel recoil and the residual pressure of gas in the barrel.

The gun is transported by means of a separate two-wheeled towed "Sonderanhangar 51" (trailer 51).

A magazine box holding one twenty round magazine is fitted to the right wing and a tool box (lid broken) on the left. The mounting rests on three adjustable feet and an adjustable layer's seat is fitted. The traversing and elevating mechanisms are worked by separate handwheels. The cradle is mounted on two journals forming the axis. The gun is fired by a foot pedal. This leaves both the layer's hands free. Lighting equipment is provided to illuminate the crosswires on the sight. Sights are "Flakvisier 38" which is an automatic electric sight. Markings - Manufacturer's proofs on cradle 'bmv 2508'. Breech proofs and numbers '7088 dud, Sg 75952, Ls G18 bys.' German cyphers and barrel proofs on gun barrel; 'Nr 2071; Rohr No 1 S, dud 2003, 5407 cyg. 2071.' Sight missing. The gun retains its original Afrika Korps dark sand paint scheme. A number of names and service numbers have been scratched onto the gun shield. There is some damage to the gun shield brackets. The breech of the weapon is fully operational. The code bcd on the breech of this particular FlaK 38 indicates that the ordnance was manufactured by the Gustloff Werke at Weimar.

The FlaK 38 became operational in 1940 and was a standard German light anti aircraft gun during the Second World War. The term FlaK is an abbreviation of Fliegerabwehrkanone, literally 'Aeroplane Defence Cannon'. It was widely employed by all German Second World War fighting services (Luftwaffe - Air Force, Kreigsmarine - Navy, Heer - Army and the Waffen SS) and it was manufactured in a number of models and configurations. Over 20,000 were produced by the end of the Second World War in 1945.

The calibre of the weapon is 20mm. The practical rate of fire 180 to 220 r.p.m, with a horizontal range of approximately 5000 yards. The effective ceiling of the 2cm FlaK 38 is 3,500 feet. The weapon was hand fed by a distinctive 20 round curved box magazine (attached to this weapon) and it featured a quick change barrel. An inertia block prevents rebound of the breech block. The mechanism is operated by short barrel recoil and the residual pressure of gas in the barrel.

Contact was made with Mr N L Povah of Western Australia (one of the names scratched on the shield) in December 1998. The gun had been transported to the 1st Advance Field Workshop unit at Rafa in Palestine where Mr Povah was stationed, and where he inscribed his name. Mr Povah believed that this gun had been captured at El Alamein. A file held within the War Memorial's archive, AWM 54 905/25/22 'Catalogue of equipment - enemy', lists a German 2 cm AT AA gun as having been captured at Fort Capuzzo. It is possible that it is the same weapon.