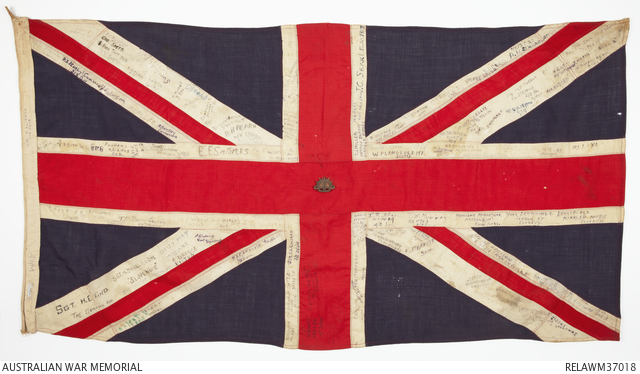 Little is known of this flag apart from the dozens of individual experiences of the men and women whose names are featured. The names indicate that a number of the signatures were inscribed in the Middle East during 1940 or early 1941 by members of the Australian 6th Division, many from the 2/3rd Australian Infantry Battalion. Two sisters from the Australian Army Nursing Service, 2/5 Australian General Hospital, Ruby Ida Watterson and Maureen Matilda Fakhry, are also featured. Other signatures, such as 433721 Flight Sergeant William John Fitzgibbon of 460 Squadron RAAF, and Sergeant Gilbert Cory of the 2/3rd Battalion date to 1945.

Those that did not survive the war include:

Others went on to be recognised for their gallantry including:

“NX5458 POP MORGAN” - Corporal Walter Morgan awarded the Military Medal for gallantry in the capture of Fort Goybet near Damascus from the Vichy French on 21 June 1941
“MIDNIGHT. McFARLANE. NX11336 (2/3rd) KINGS CROSS “ - NX11336 Private Ernest Roy McFarlane who was awarded the Military Medal for his actions Eora Creek, New Guinea in 1942
“G E CORY M.C.,D.C.M 2/3 Aust Inf Bn NX7864” - Sergeant Gilbert Ernest Cory who was Mentioned in Dispatches for his conduct in the Middle East, awarded the Distinguished Conduct Medal for his actions on the Kokoda Track in 1942, and later as an officer was awarded the Military Cross for his courage and leadership near Danmap, New Guinea, in 1945.

Individual identification is ongoing and we invite information on any of the featured names that are not accompanied by service numbers to contact the Military Heraldry and Technology section of the Memorial (mht@awm.gov.au). Any information about the history of the flag would be gratefully received.