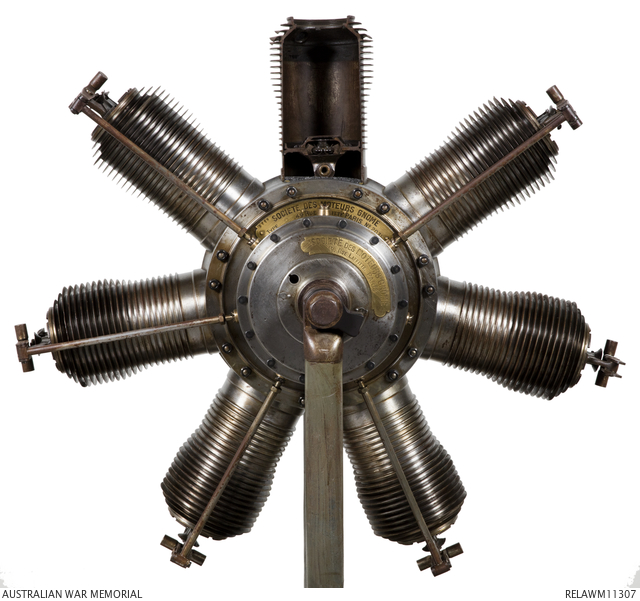 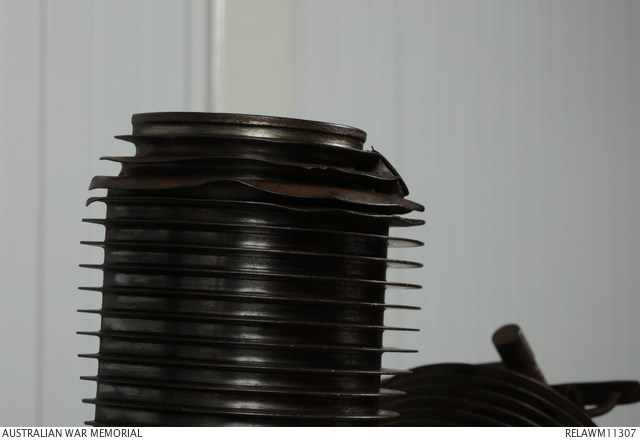 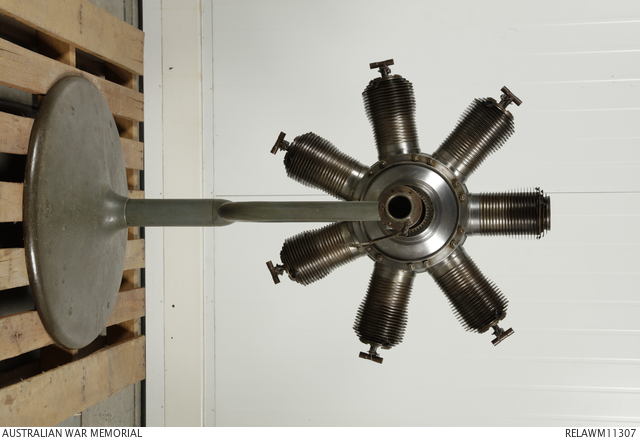 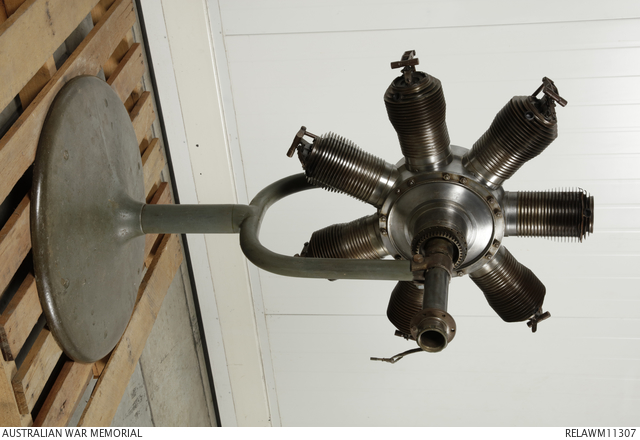 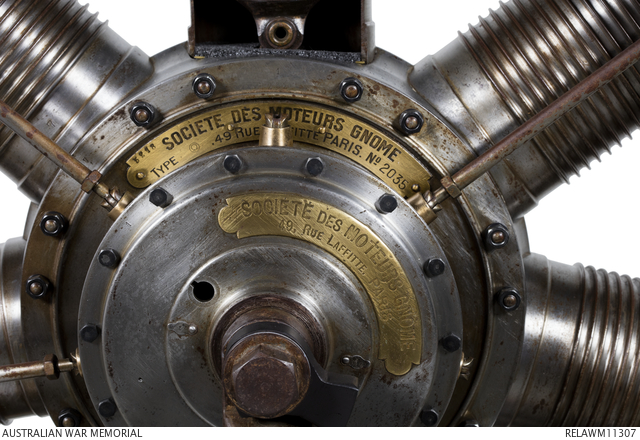 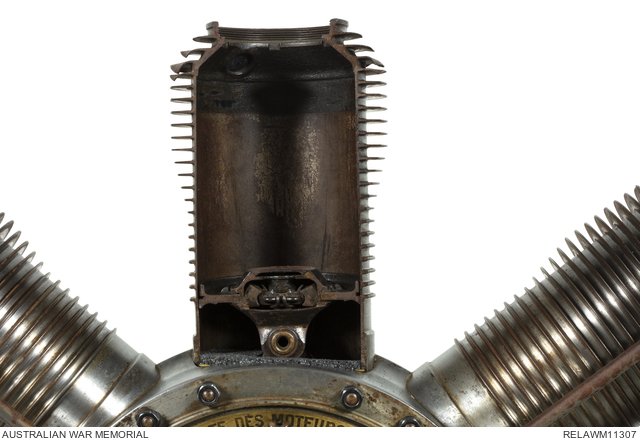 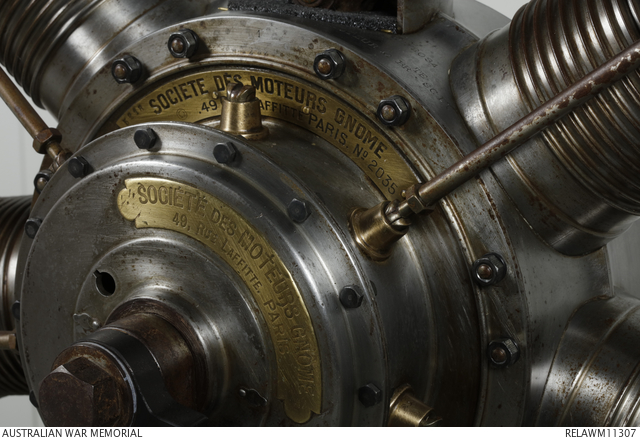 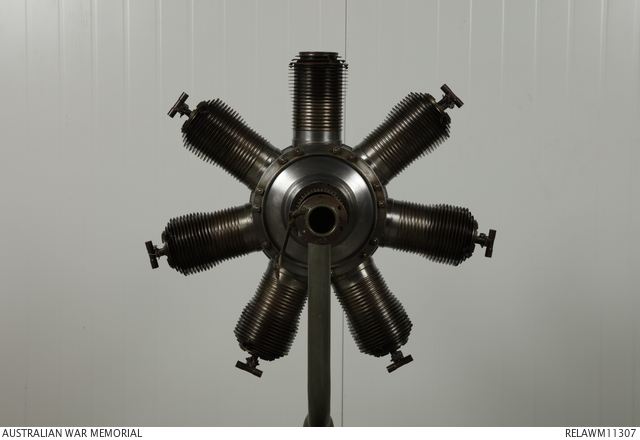 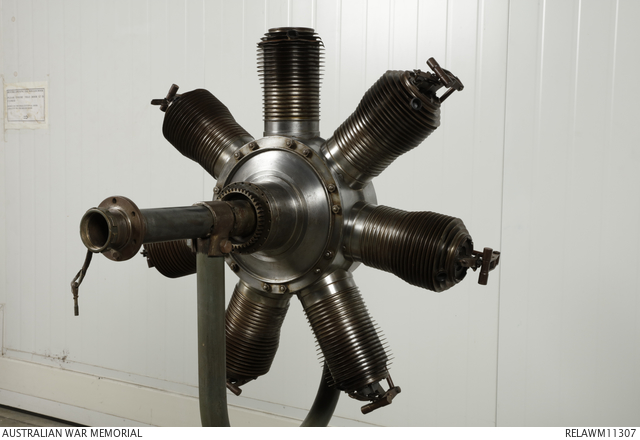 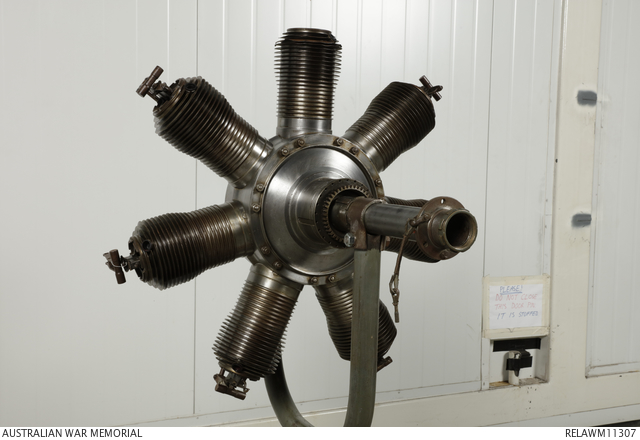 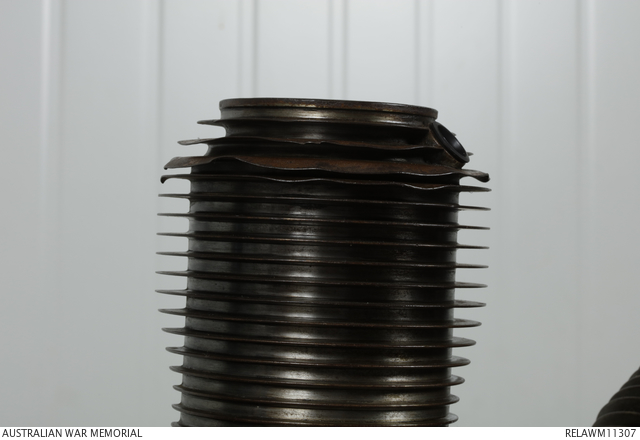 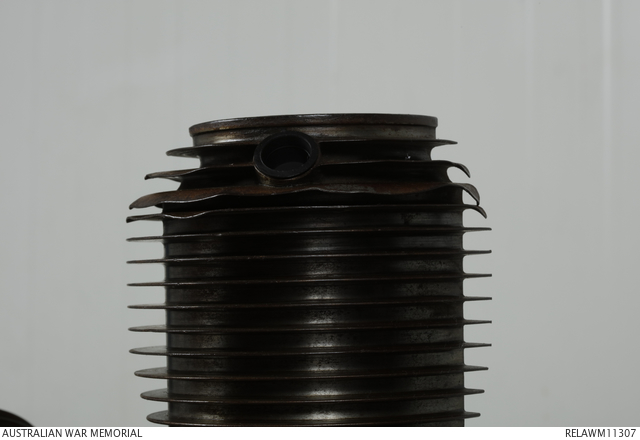 Gnome 7 Omega, 50hp, 7-cylinder, single-row rotary air-cooled, poppet-valve. Bore/stroke 110 x 120mm. Vol. 488.5 cu ins. Direct R.H. tractor/L.H. pusher-drive. Engine is mounted on a metal stand. Two of the tappet rods were missing when machine was handed over to AWM in 1929. One cylinder is sectioned and was damaged during its period of storage.

This engine type was fitted to a number of early aircraft in use at Point Cook prior to and during the First World War, including the Bristol Boxkite and the Bleriot X1. An Air Board letter of 28/11/1929 states that this particular engine was "one of the first aircraft engines actually used in training machines at Point Cook during 1914 and 1915". (AWM File 748/4/5).

The Gnome rotary aero engine was made by the Societe Des Moteurs Gnome & Rhone in Paris. The origin of the name "Gnome" has long been in dispute. In an article published in the noted German aviation magazine Aerokurier in 1983, the writer stated that, in 1900 the French engineer brothers, Laurent and Louis Seguin began licence production of a single-cylinder, stationary internal combustion engine for industrial purposes, which had been originally developed by the German Engine Factory Oberursel. This small and successful engine was to replace the large and cumbersome steam engine as a source of power and was called the "Gnom" (a colloquial word signifying "dwarf"). The Seguins adopted the name in its French version for their own industrial engine and, when they began to design their highly successful series of rotary aero-engines in 1907, they adopted the name Gnome for them. It was natural that, when Germany appreciated the virtues of these engines, the firm Oberursel reversed the process and acquired the licence to build them and used them to considerable effect, notably in the early Fokker fighters.

The rotary engine operated on the principle of a fixed crankshaft with the cylinders and propellor revolving at high speed. Rotary engines had a good power-to-weight ratio but gyroscopic forces caused by the mass of the spinning cylinders caused handling problems. The oil system was a 'total loss' principle, which sprayed castor oil not only on the engine but also over the pilot if the engine was mounted at the front. Engine speed was regulated by a 'blip switch' operated by the pilot which could cut the ignition temporarily. Like all rotaries, it suffered from cooling problems and consequent distortion of the cylinders, particularly on their "downwind" side. Seguin used the French designed "obturator" ring on the cast-iron pistons, made in very thin brass or aluminium alloy, in an attempt to ensure gas-tightness, despite the cylinder distortion. It was not a very efficient or reliable system and the obturators were very fragile. These rings had a life of about fifteen hours flying and, when they broke, the pistons seized at once. nonetheless, it was a highly successful early aero engine design. Indeed, the journal 'Flight' stated in its 31 December 1910 edition that "...it not only worked satisfactorily but was at one time practically the only motor capable of developing the necessary power within the necessary limits of weight".