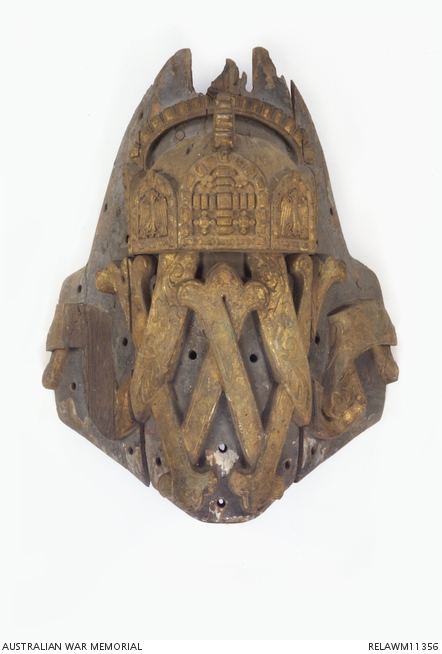 Stern ornament of SMS Emden, made of painted and gilded timber. The ornament, made in three pieces, is curved to follow the contour of the Emden's stern. The carved decoration comprises a large imperial crown (the top decoration of which has broken away) above the stylised letter 'W' (for Kaiser Wilhelm II, Emperor of Germany). Extending from the bottom of the crown, over the top of the letter, are a pair of ribbons with decorative leaf patterns carved upon them. A large part of the lower right hand ribbon has broken away, exposing the raw timber beneath. The decorative sections are all gilt painted, with the background areas in medium grey, although in places where the paint has cracked off, there is evidence of earlier coats of pale grey or white paint having been applied. The ornament is supported from within by three steel bars (2 horizontal and 1 vertical) which have been screwed in place, and presumably date from the time of its removal from the Emden. Original attachment to the vessel would have been via a number of bolts through 3cm holes drilled in the timber and plugged after attachment. Most of these holes are visible on the surface, but several still have their plugs in place. The upper sections of the timber are damaged in many places, with several areas missing.

Stern ornament removed from the wreck of SMS Emden after her destruction at North Keeling Island by HMAS Sydney (I) on 9 November 1914.