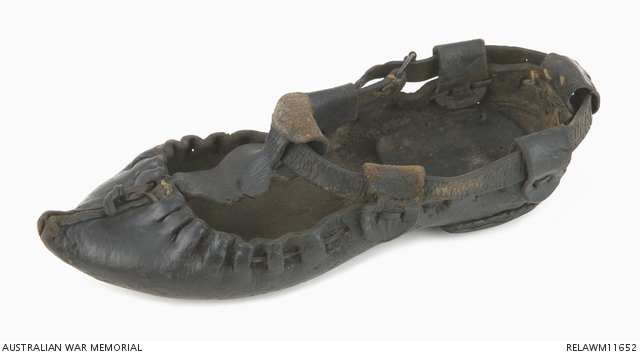 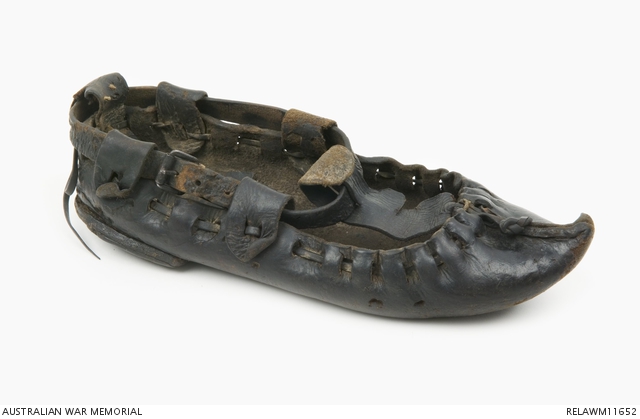 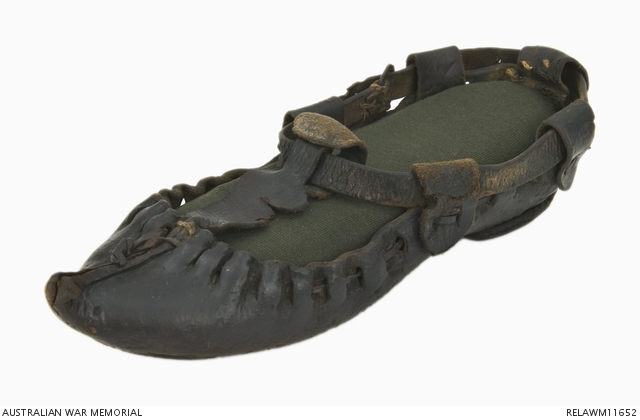 Turkish soldier's open shoe made from thick cow hide. The body of the shoe is cut from a single piece of leather gathered into shape around the upper edge by means of a leather thong threaded through a series of slits. The toe is sewn into a traditional upturned point. There are five broad leather keepers attached around the back of the shoe with leather thongs. These hold a leather strap and buckle in place to adjust the fit of the shoe. The strap also passed through a T-strap attached to the centre front of the shoe. The heel is reinforced both inside and underneath the body of the shoe by leather semi-circles attached to each others by a series of nails.

This shoe was recovered from a dead Turkish soldier found on the slopes of Plugge's Plateau above Canterbury Gully at Gallipoli, on 7 June 1915, by 1838 Sergeant (later Warrant Officer II) Albert Richmond Compton, of 13 Battalion, AIF, and sent back to Australia as a souvenir.

Compton enlisted on 15 February 1915. After service on Gallipoli he transferred to 4 Pioneer Battalion in March 1916 and moved to France. A year later he transferred back to 13 Battalion. He was twice wounded, in July and August 1916. He was captured by the Germans at Bullecourt on 11 April 1917 and spent the rest of the war as a prisoner. Compton was discharged on 23 July 1919.