Saluting the squadron on board the Nelson; verso: page of newspaper text from 'The Australaisan Sketcher' 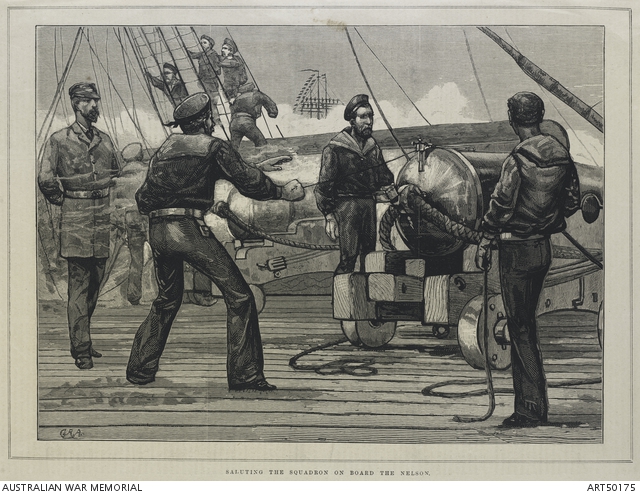 This engraving is by an unknown artist after George Ashton. It shows a scene published in 'The Australasian Sketcher', Melbourne, 4 May 1885, depicting a gun crew on the frigate HMS 'Nelson' firing a 42 cwt 32 pounder gun in salute. A sailor in the left foreground is holding a lanyard which operates a fuse which in turn fires the gun. The hawser threaded through the cascobel prevents gun on recoil from travelling across the deck and over the side. In the background beyond the smoke from guns are the upper yards of a ship dressed overall (possibly the ship being saluted). The HMVS Nelson is signalling to three vessels, 'The Inconstant', 'Carysfort', and 'Tourmaline' who were anchoring in the Sandridge and Wiliamstown docks near Melbourne on their return from Simon's Bay, South Africa where they were ready to assist with the Boer conflict.