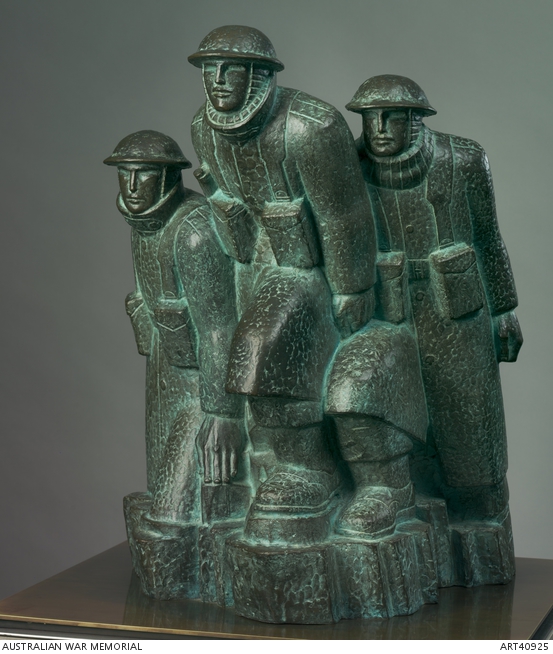 Dadswell completed the plaster model for 'Greece' in July 1943, in time for the touring exhibition which opened in Melbourne that year. It was his second, larger and more finished interpretation of a group of three soldiers of the 16th Brigade of the 6th Division. The earlier sketch model, 'Patrol', is a more naturalistic interpretation of the subject, emphasising the soldiers' individual features and movements. Dadswell was aware of the military historical significance of this sculpture of the campaign in Greece, which was not recorded by any other Australian artist, He wrote:
"The 'Greece' group represents the 16th Australian Infantry Brigade during its march back over Mount Olympus. Straining, climbing, exhausted, half-frozen soldiers. Owing to complete absence of roads, lack of unit transport, intense cold and great distances covered, this movement stands high as a feat of physical endurance."
Dadswell transcended his personal sense of the futility of the war to express great admiration for the determination and courage of these men who would not concede defeat in the face of such deprivation. Dadswell de-emphasised the naturalistic details seen in the earlier version of the work and united the three individuals to represent a single forward movement. This force is what gives the work its power. This is the bronze cast of the third version Dadswell made of 'Greece'. Originally entitled 'Patrol', the first version is a rough sketch (ART26395), and was made in the Middle East in 1941. Another version was produced shortly after returning to Australia in 1942 (ART26401), and this third, more stylised and refined version completed in Sydney in 1943, with the bronze cast made in 1984.