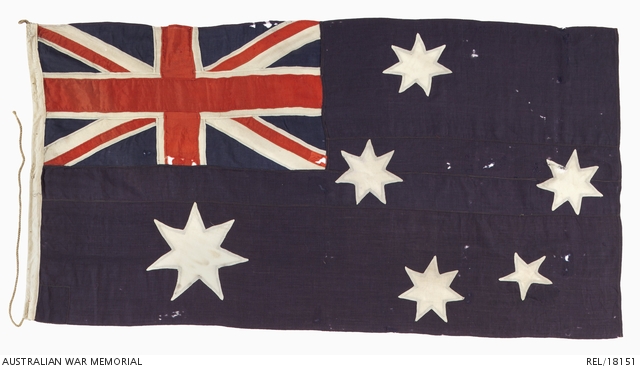 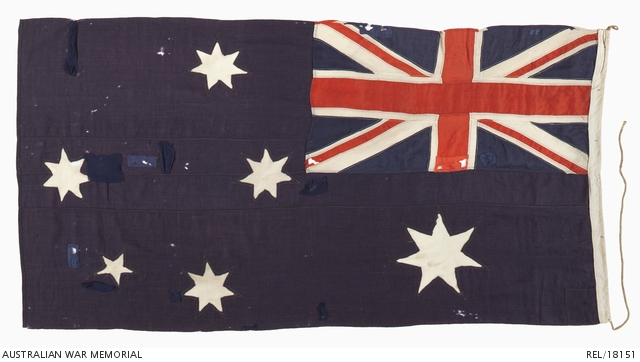 Associated with the service of Lieutenant Basil Holmes, who was born in Sydney on 11 September 1892.

Holmes grew up in the Sydney area and was educated at Sydney Grammar School. During his tertiary study, he obtained a commission as a second lieutenant with the 43rd Infantry. At the completion of his studies, he became an orchardist.

When the First World War began, Holmes enlisted in the Australian Naval and Military Expeditionary Force (ANMEF) and was gazetted as a lieutenant on 18 August. He was posted as the Aide de Camp to his father, Colonel William Holmes DSO, who had been selected to command the force.

Holmes embarked the following day with the ANMEF from Sydney aboard HMAT A35 Berrima. After stopping at Palm Island, the force moved on towards Rabaul, New Britain where, on 11 September, the Australian force began their landings.

The main force landed in the afternoon and Holmes sent a dispatch rider to Rabaul with the terms of surrender for the German garrison. The garrison surrendered on 12 September and the Union Jack was raised above the town the next day.

In mid October, Holmes accompanied Major Francis Heritage and a party of troops to Kawieng (Kavieng), New Ireland to occupy the island and secure the release of the British Consul, Frederick Jolley. The force arrived at Kawieng on the afternoon of 17 October and landed unopposed. The Union Jack was immediately hoisted over the town and the German District Officer was summoned to surrender.

Heritage and the main party departed that afternoon to hunt the German ship Siar, hidden amongst the Gardner Islands. Holmes was left in charge of a 10 man garrison at Kawieng and by 20 October had secured the release of Frederick Jolley.

Holmes later returned to Rabaul and on 18 January 1915 returned to Australia aboard SS Eastern. He was discharged from the ANMEF on 6 February. He then enlisted in the AIF and was appointed as a lieutenant in the 18th Battalion on 26 May.

He embarked from Sydney on 19 June aboard HMAT A61 Kanowna, disembarking in Egypt in July. After a period of further training in Egypt, the battalion departed for Gallipoli in mid August. Upon arriving on Gallipoli, Holmes and the men of 18 Battalion were thrown into the Australian’s final offensive on the Gallipoli Peninsular, the Battle for Hill 60.

Holmes was wounded in the head during the initial attack and evacuated to Malta. The battalion suffered heavily over the following days, with 50% of the men becoming casualties by the end of the month.

During his recovery, Holmes transferred to the 17th Battalion and upon being declared fit, joined that unit on Gallipoli in early October. He was promoted to captain on 8 October and was placed in command of ‘C’ Company. He remained on Gallipoli until the evacuation of allied forces from the ANZAC area in December.

On 17 March 1916, 17 Battalion embarked for service on the Western Front, disembarking in Marseilles several days later. The battalion was sent to the Nursery Sector near Armentieres and went into the front line there at the end of the month.

On 24 July, Holmes was sent to hospital at Rouen suffering with jaundice which had been brought on by repeated bouts of malaria. He was evacuated to England to recover, rejoining 17 Battalion at the end of September he resumed command of ‘C’ Company.

Holmes saw out the remainder of the year with the battalion, suffering through the winter in and out of the front lines on the Somme. Throughout his service, Holmes’ character and style of leadership endeared him to officers and men alike. He was recommended for further promotion for a battalion command course.

On 5 January 1917, Holmes proceeded to England to undertake a course of instruction in command and duties of running a battalion at Aldershot. The course began on 8 January and he was promoted to major a week later.

Holmes successfully completed the course in mid-March and received high praise from his instructors. He returned to the battalion as the second in command and took part in the follow up of the German forces after their retreat to the Hindenburg Line and the Second Battle of Bullecourt in May.

Holmes’ father, Major General William Holmes CMG, DSO, VD was killed during an official tour behind the front lines near Messines on 2 July when shrapnel from a shell burst struck him in the neck and chest.

Holmes was awarded a Distinguished Service Order on 1 January 1918 ‘For consistent good work and devotion to duty. He is 2nd in command and is a most capable and reliable officer, has high organising powers and is a good leader of men. His marked ability and tactful manner have been of great assistance in maintaining a high standard of efficiency in the battalion. He is in close personal touch with all ranks and thus enjoys their fullest confidence. On several occasions since February 1917 he has commanded the battalion and during that time has proved himself highly efficient and resourceful.’

He proceeded to India in 1918 and spent the next 21 years in the Indian Army, retiring as colonel of the Bengal Lancers. He returned to Australia, retiring to a property near Bowral, NSW.