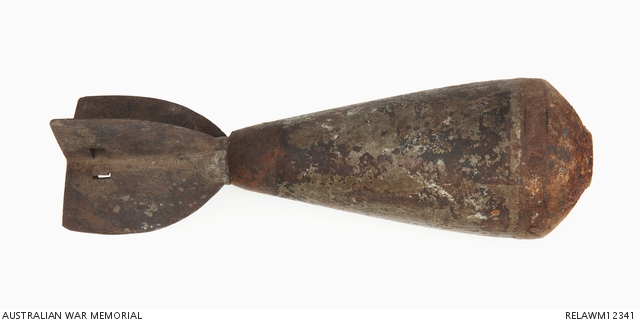 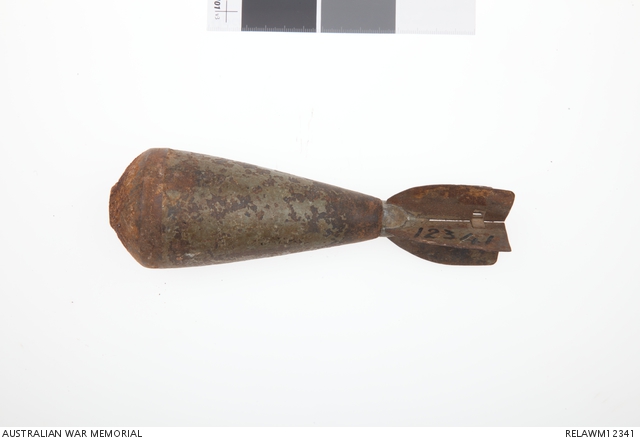 French Brandt 1915 60 mm pneumatic mortar projectile made from cast metal and sheet steel. The projectile is tear drop in shape and has a sheet metal four fin tail which is screwed into the rear of the projectile. The projectile is fired from a launcher tube linked to a system of tanks, pneumatic pistons and a mobile breech. There are no markings.

A French pneumatic fired mortar bomb developed by the Brandt Company in 1915. This was an early attempt to develop a small portable launcher to launch mines and other projectiles during the early phases of the First World War. Although not very powerful, it was mobile and silent in operation. The launcher consisted of a tube 1.3 metres long which was linked to a system of tanks, pistons and a mobile breech weighing in total 22 kg. A 3 legged cradle weighing 16 kg could be mounted for logistics. The propellant was compressed air that was supplied from bottles or from manual pumps. There were two kinds of projectiles. Both projectiles were approximately 60 mm in diameter. The Type A shell weighed 950 grams and was filled with explosives. The Type B shell, developed in 1916 was augmented by pre-fragmentation grooves and a percussion fuse with a safety pin.