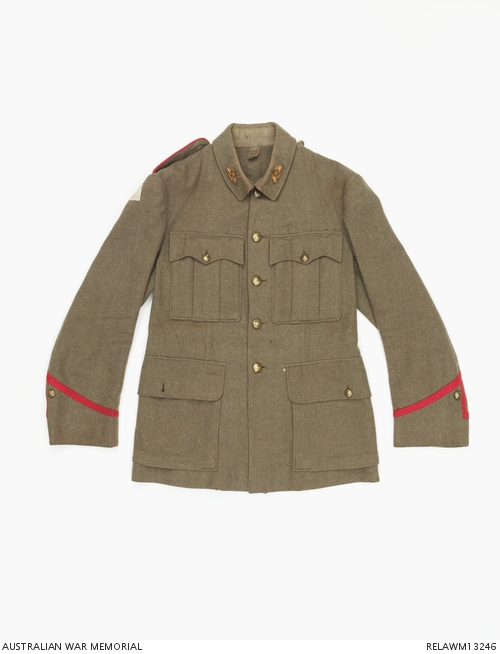 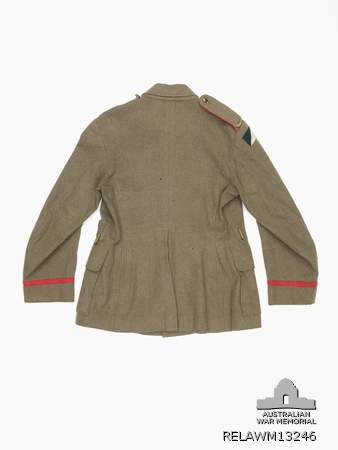 Khaki tunic made from fine wool serge. The tunic has a high neck with fold down collar and a back vent. There are four expanding patch pockets secured with flaps and brass buttons. The breast pockets are pleated. The wrists of the tunic and the shoulder strap of the right shoulder are edged with red piping. The left shoulder strap is missing. The shoulder strap also has a curved 'Australia' title and is secured with a brass button. Below the shoulder on the right arm is a colour patch for 2 Light Horse Regiment. The tunic also has two brass Rising Sun collar badges and brass belt hooks.

Worn by Gunner Lewis David Price when he was selected to be part of the Australian Coronation Contingent. The Contingent traveled to England, via Egypt, for the 1937 Coronation of King George VI. Price was one of the Australians who suggested that Dominion soldiers participate in a 24 hour guard at Buckingham Palace and proudly took his turn as King's Guardsman. A native of Goodna in Queensland, Price was born in January 1896. Before the First World War he did a year of militia service with 11 Infantry Regiment and then enlisted in the Australian Imperial Force on 2 November 1914. He was attached to the 2 Light Horse Field Ambulance and landed on Gallipoli in May 1915. On 14 December he was evacuated with frostbite a few weeks before the general evacuation. He soon rejoined his unit and served in Egypt and Palestine until the end of the war. He left Suez for home leave in November 1918 and was discharged 26 February 1919. By the time of his discharge he was a Corporal and had been Mentioned in Despatches. His MID was published in London on 22 January 1919. Between the wars Price worked with the Department of Defence as a Storeman. In the late 1930s he joined the Commonwealth Military Forces and on his return to Australia from the Coronation celebrations he was posted to Darwin with the Australian Army Ordnance Corps from 1938-1940. On 19th June he enlisted in the AIF and was assigned the service number DX564. In October that year he embarked for service in the Middle East. He served in North Africa, Palestine and Syria with 7 Division Headquarters, on the staff of Major General Lavarack. He returned to Australia in March 1942 and continued serving with the AAOC in the Northern Territory with the Darwin Mobile Force and was in command of 2 Base Ammunition Depot. During his service he was promoted Lieutenant in August 1941, Captain in September 1942 and Major in May 1944. He was discharged on 30 June 1948.