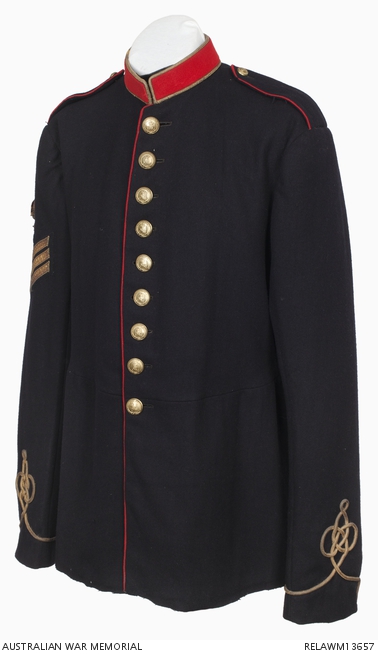 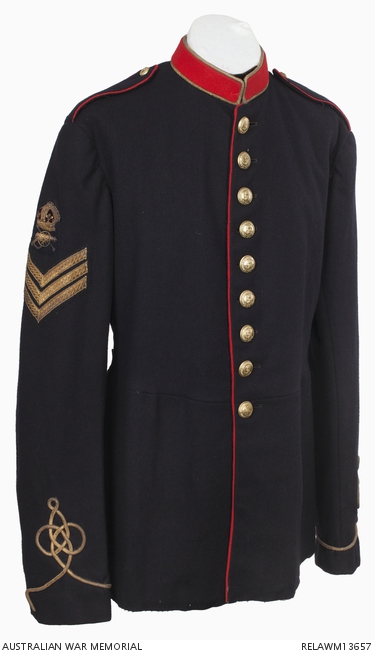 Dark blue wool cloth parade or full dress tunic. The scarlet stand collar is edged with round gold cord and has a black patent leather neck protector behind the two black coated metal hooks and eyes which fasten it. The dark blue shoulder straps are edged with red wool piping and secured near the collar by a small brass button. All the buttons on the tunic, made by Stokes and Sons, Melbourne, are for the permanent artillery, showing the crown and cypher of King Edward VII in the centre with 'ROYAL AUSTRALIAN ARTILLERY' around the edge. The cuffs are decorated with round gold cord Austrian knots. The right sleeve has three inverted chevrons in gold lace on a dark blue ground. Above them is a gold wire embroidered badge for a battery sergeant major of the permanent artillery (post 1901) composed of a crown on a dark red velvet ground above a field gun. The front piped opening is piped with red wool and fastens with nine buttons. The back skirt has a closed artificial vent and sword flaps decorated with red wool piping and six buttons. There are brass belt hooks on each side of the waist sides and two brass buttons on the rear waistband. The tunic body is lined with a black cotton sateen mixture; the sleeves with striped cotton twill. The left sleeve lining has a pink ink stamp 'C.G.C.F., 1914 No. 1'. There is a concealed pocket inside the left breast and cotton twill hanging loop inside back neck. The edge of the skirt has been left raw.