Dried wild flowers from the graves of the crew of Zeppelin L32 : Great Burstead Churchyard 1916 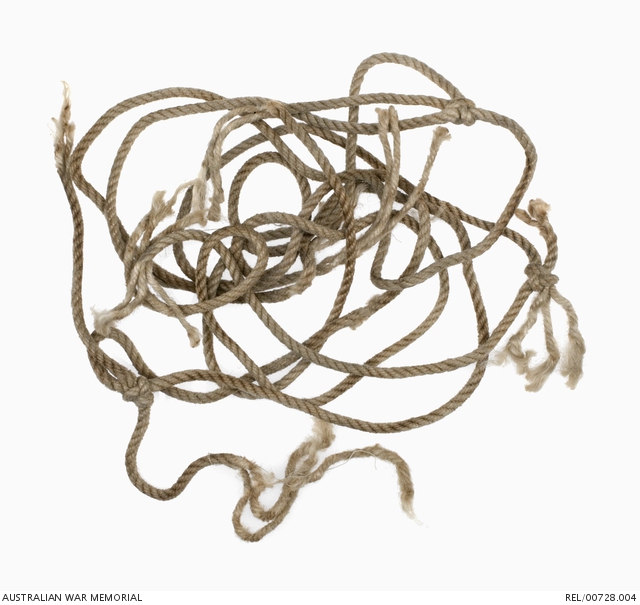 Several strands of cord. Some are tied together; all have frayed ends. Each piece of cord is made up of 2 segements twisted together.

The Zeppelin L32 was the first genuine German Zeppelin shot down over England during the First World War, early on the morning of 24 September 1916. A few weeks earlier, on 3 September, the very first German airship was shot down over London, the Schutte-Lanz SL11 (although it was not a Zeppelin, it was commonly referred to as one). L32 was shot down by Second Lieutenant Frederick Sowrey and crashed in flames at Great Burstead, near Billericay in Essex. All 22 members of the crew of were killed. Most died due to the flames, but some, including the airship's commander, Werner Peterson, chose to jump to their deaths. The crew was initially buried at Great Burstead until their remains were moved, together with those of the crews of SL11, L31 and L48, to be reinterred at Cannock Chase German Military Cemetery in Staffordshire in the 1960s. Minutes after the L32 crashed, the Zeppelin L33 crash landed at New Hall Farm, Little Wigborough, also in Essex. The crew of L33 survived and became prisoners of war. Pieces of airships, especially Zeppelins, were a very popular souvenir in England. People travelled considerable distances to view the crash sites and purchase, or scavenge for, pieces of the wreckage. At the site of the crash of SL11 pieces of the wreckage were sold by the Red Cross to raise money for wounded soldiers. At the site of L32 soldiers tried to prevent the public from going near the site, but people still managed to collect thousands of pieces of the wreck which had fallen in nearby fields. While some pieces remained as they were found, other pieces of airships were turned into souvenir items such as jewellery.