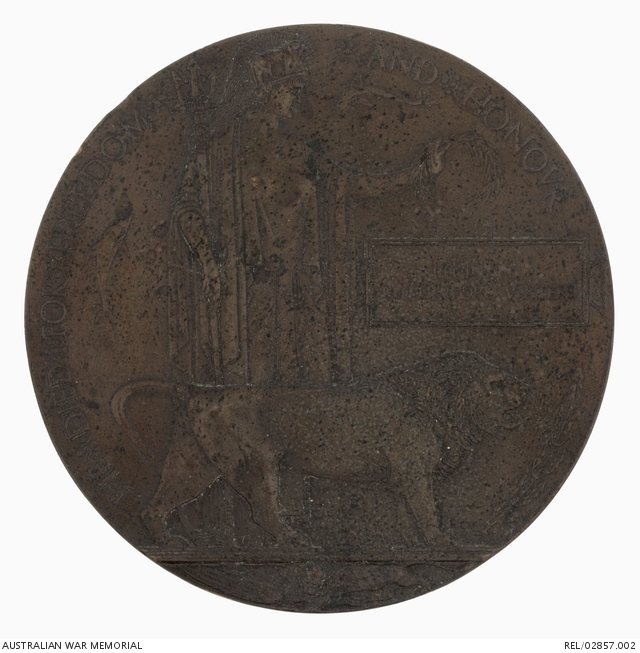 Bronze next of kin plaque, showing on the obverse, Britannia holding a laurel wreath, the British lion, dolphins, a spray of oak leaves and the words 'HE DIED FOR FREEDOM AND HONOUR' around the edge. Beneath the main figures, the British lion defeats the German eagle. The initials 'ECP', for the designer Edward Carter Preston appear above the lion's right forepaw. A raised rectangle above the lion's head bears the name 'REGINALD RUTHERFORD WATERS'.

870 Private Reginald Rutherford Waters was a 21 year old driver, from the suburb of Carlton in Melbourne, Victoria, when he enlisted in the AIF on 1 March 1915. After basic training he was assigned as to D Company, 23 Battalion.

The battalion left Melbourne for Egypt aboard the transport HMAT A14 Euripides on 10 May. After further training in Egypt, they arrived at Gallipoli in early September and soon afterwards went into the line at Lone Pine, remaining there until the evacuation in December. At Lone Pine the fighting was so dangerous and exhausting that 23 Battalion alternated in the line with 24 Battalion on a daily basis.

On 29 November, 23 Battalion's position was subjected to heavy Howitzer fire from the opposing Turkish forces. A number of Australian saps and a communications trench were damaged. During the bombardment, Waters was wounded by an incoming shell. He was evacuated to 6 Field Ambulance at nearby Brown's Dip, where he died at 9.30 am the following morning. Initially buried in the Brown's Dip Cemetery, Water's body was exhumed after the war and interred in the Brown's Dip Plot in Lone Pine Cemetery.

This plaque was sent to Water's widowed mother, Mrs Letitia H Waters, in 1921.