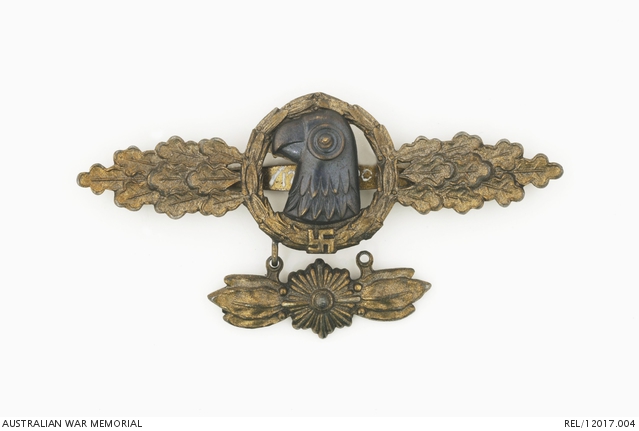 Gilded circular wreath with a Swastika at the bottom. Extending from either side of the wreath are gilded sprigs of oak leaves. Voided within the wreath is the bronze profile of an eagle's head with a large eye, facing to the wearer's right hand side. Suspended from the bottom of the wreath by a single ring-hook (the other one of the pair is missing) is a gilt pendant in the form of star, with a spray of laurel leaves on either side.

This badge was collected by 400071 Flight Lieutenant William Alexander Trickett, RAAF, while he was a prisoner of war at Stalag Luft III, 30 miles south east of Luckenwald in Germany. The Reconnaissance/Air-Sea Rescue/Meteorological Gold Clasp was one of a series of flying clasps instituted in 1941 to reward aircrew who had flown a large number of operational sorties. All varieties consisted of a circular laurel wreath with a spray of oak-leaves on either side, the symbol in the centre of the wreath and the colour of the badge indicating the arm of the service and the number of operations flown. A bronze clasp was awarded for 20 missions, silver for 60 and gold for 110. In 1942, a pendant device of a gold star with sprays of laurel leaves on either side (the 'anhanger') was instituted to recognise larger numbers of operational flights completed - 250, 300, 400 or 500 depending upon the branch of service. By mid 1944, this pendant had been replaced by a new anhanger containing a boxed numeral marked in increments of 100 from 200 to 2000, indicative of the greater pressure now being placed upon Luftwaffe aircrew.

The badge was collected by William Alexander Trickett, who was born in Melbourne on 12 June, 1917. He joined the Air Cadets on 16 January, 1939 and transferred to the RAAF on 26 May, 1940. Trickett trained as a Navigator at Parkes, NSW. He embarked for the United Kingdom on 21 February 1941, and after further training there undertook 18 missions as a Pilot Officer and Flight Lieutenant with 35 and 76 Squadrons RAF.

On the night of 27/28 April, 1942 the Halifax bomber, in which he was the Navigator, was hit by Flak, damaging the controls of the aircraft and killing the rear gunner. Trickett bailed out with two other crew members (the Flight Engineer and Wireless Operator), over Dunkirk, was captured and became a prisoner of war. Between 1942 and 1945 Trickett was held at Stalag Luft III and Oflag IIIB. On 21 April 1945 Stalag Luft III was liberated by the Russian Army. The German guards left the camp to the inmates who had to fend for themselves. Trickett's duty at the end of April was to obtain the bread supply from the local town of Luckenwalde 30 miles South of Berlin, where he also obtained a selection of German combat badges at an abandoned shop. After his release he rejoined 76 Squadron. He was discharged on 15 January 1946.