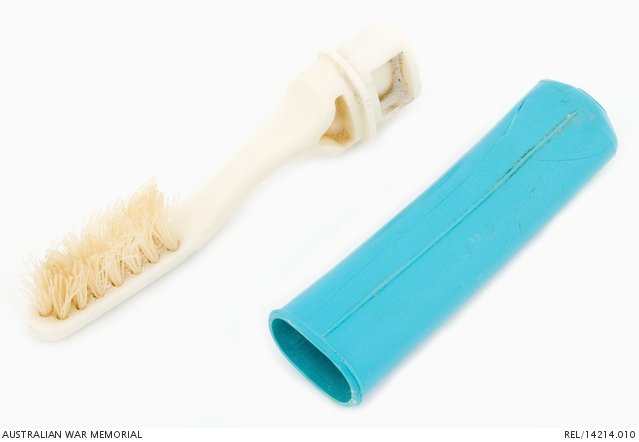 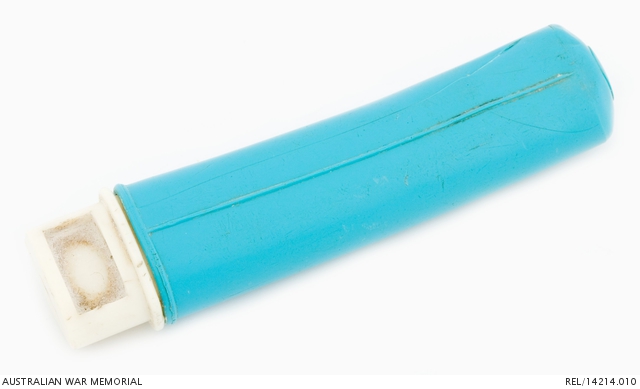 Infantry and Special Forces troops on operations need to carry a wide range of personal objects to maintain themselves on patrols. It is critical that these objects are as light and as compact as possible to save valuable space and weight for their military equipment and weapons. This commercially available self contained travelling toothbrush is an example of this attitude.

Donald Richard Barnby was born in Brewarrina, NSW on 8 April 1950. After leaving school and taking on temporary jobs in the Wellington area of NSW, he joined the Australian Regular Army on 17 May 1967 and was allocated the service number, 217585. After completing basic training at Kapooka Barnby sought a combat role, but to his disappointment, was posted to the Royal Australian Ordnance Corps. He completed his Initial Employment Training at Army training facilities at Bonegilla and Bandiana in Victoria and was posted to 2 Base Ordnance at Moorebank, NSW.

A friend joined the Special Air Service Regiment (SASR) and convinced him to so too. In 1970, Barnby passed the gruelling cadre course for entry into the elite SASR, based out of Swanbourne Barracks in Perth, WA. Barnby qualified as a parachutist, and became part of the Free Fall Troop otherwise known as 'F Troop' of the SASR. At this time there was a popular American comedy series called 'F Troop', about American soldiers based at Fort Courage, a fictional army outpost in Kansas, following the Civil War.

From 17 February to 10 October 1971, Trooper Barnby deployed to South Vietnam as a member of Two Five Patrol, F Troop, 2 Squadron, SASR. Based out of the 1st Australian Task Force base at Nui Dat, Phuoc Tuy Province, they conducted clandestine reconnaissance and offensive operations against the North Vietnamese Army and Viet Cong.

In 1990 Barnby was promoted to sergeant. He deployed many times overseas with the AFP, as part of several Peacekeeping and Peace enforcement operations. They included the United Nations Peacekeeping Force in Cyprus (UNFICYP) and Multi-National operations in both Bougainville and East Timor (UNAMET).

Barnby retired from the AFP in 1998 on a voluntary redundancy. He was requested to re-join the AFP and deploy to East Timor as a United Nations Australian Civilian Police Officer (UN AUSTCIVPOL), with the AFP 1st UN Police Contingent as part of UNAMET in July 1999. UNAMET had been sent to East Timor on 11 June 1999, to organise, conduct and supervise a referendum to allow the East Timorese to choose between autonomy within Indonesia or independence. Following the overwhelming vote for independence on 30 August 1999, the pro-Indonesian militia launched a campaign of destruction, arson and murder, killing approximately 1500 people and forcing 300,000 others into West Timor as refugees.

The AFP 1st UN Police Contingent was un-armed, and witnessed the worst of the killings, displacements and other horrifying incidents during their deployment in 1999. Barnby and his colleagues regularly faced fully armed individuals and groups and endured demanding physical and emotional conditions in the course of this deployment.