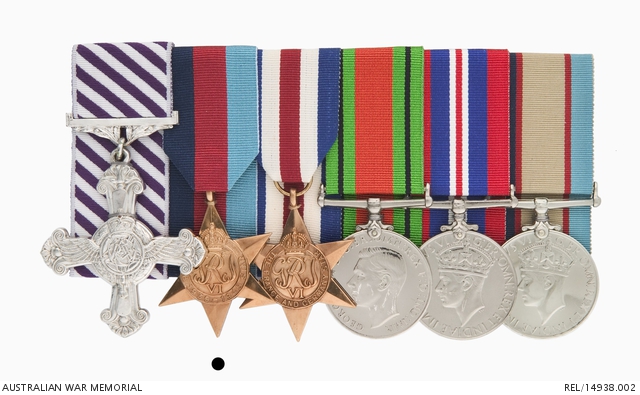 405792 Squadron Leader John Cecil Holmes, served in 460 Squadron, RAAF. Born in Brisbane in 1921, he worked as a woolclasser in Toowoomba before his enlistment in the RAAF on 20 June 1941. He qualified as a pilot and flew Lancasters for 460 Squadron. He was promoted to Squadron Leader on 25 January 1945. Holmes was awarded a posthumous Distinguished Flying Cross, on 1 March 1946. Holmes was involved in many of the huge night bombing raids on industrial and civilian targets in Germany, including Dresden and Chemnitz. On 5-6 March 1945 twenty one Lancasters from 460 Squadron were involved in a 1,100 bomber raid on the Chemnitz Armaments Works, which proved to be Holmes' last. Flying Lancaster PB463 Holmes and his crew died when their damaged aircraft made a forced landing near the village of Prieffe and its bomb load exploded. Their resting place was marked by the Germans with a large wooden cross bearing the words 'Here lie eight English flyers killed in a crash on 5 March 1945.