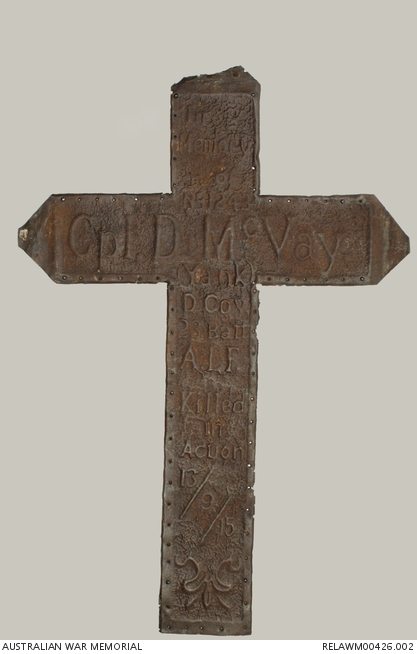 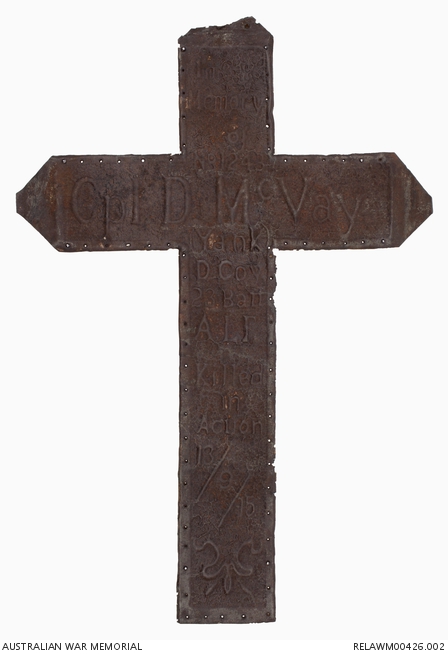 This plate from a grave cross for Corporal David 'Yank' McVay, along with one for Private Charles Hampson (RELAWM00426.001), was recovered at Gallipoli by Captain Gordon Samuel Keesing in 1919. Keesing was an assistant to Sir John Burnet, the architect tasked with the design of the permanent cemeteries at Gallipoli. Originally the plate was attached to a wooden cross. However, the cross was probably used as fire wood by Turkish soldiers or civilians after the evacuation, as wood was a scarce commodity in the area. The plate was removed from the cross and left in the cemetery.

1243 Private David McVay, a 32 year old miner from Fitzroy in Melbourne, enlisted on 8 April 1915. He was an original member of D Coy, and embarked from Australia aboard HMAT Euripides on 10 May 1915. McVay was born in England, and had previously served with the Field Artillery in South Africa, but had deserted. He was pardoned on King Edward VII's death in 1910.

After a period of training in Egypt, he landed with 23 Battalion at Gallipoli on the night of 4 September and was marched to Rest Gully. On 5 September the battalion spent their first night in the front line trenches at Lone Pine. The fighting here was so dangerous and exhausting that battalions were relieved every day. The 23rd Battalion manned Lone Pine, alternating with the 24th Battalion, until they left Gallipoli in December 1915.

McVay was promoted to corporal on 9 September. Four days later, he was one of three men from the 23rd Battalion killed at Lone Pine on 13 September.

McVay was originally buried at the nearby Brown's Dip Cemetery. After the war this cemetery was found to be at risk from erosion, so in 1923 the bodies there were exhumed and reinterred in what became known as the Brown's Dip plot in Lone Pine Cemetery.

Hampson's and McVay's crosses were made by members of the 23 Battalion. In 1923 one of the makers, Thomas Linklater, a former member of the 23rd Battalion, contacted the Memorial after seeing the crosses on display in Melbourne. In his letter, Linklater noted that '…The crosses referred to are in themselves only trivial things but the conditions under which they were made make them more valuable. When you remember that wood was more valuable to us than money for heating & cooking purposes the wood from which those two crosses were made was worth a fortune. The wood was saved from a case we managed to get hold of also the nails with which it was fixed. Next we saved a biscuit tin from the rubbish & nailed this on the wooden cross with brass sprigs borrowed from the bootmaker. We then drew out the lettering in pencil finally stamping out the design with a punch borrowed from the bootmaker…'.

The unit war diary for 13 September 1915 day notes that McVay was sniped by a Turk from the unit's right flank. Linklater noted that McVay had been bombing the Turks when he was shot.